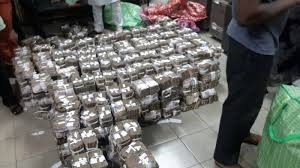 The Attorney-General of the Federation and Minister of Justice, Abubakar Malami, has been accused by a whistleblower, John Okupurhe, of refusing to pay him reward after exposing over $1billion government money hidden in Unity Bank Plc.

According to the whistleblower, the account was secretly being operated by the Nigerian Ports Authority to illegally collect revenue from vessels.

He said upon discovery, he informed the Office of the AGF in line with the whistleblower policy of the secret account and an agreement was signed.

The agreement stated that Okpurhe would be entitled to a reward if the information provided turned out credible.

The whistleblower said after playing his own part, the AGF’s office began to play games.

The letter read in part, “Pursuant to the whistleblower policy of the Federal Government, our client approached the Office of the AGF with confidential information in respect of hidden public funds concealed within a commercial bank in Lagos contrary to the Treasury Single Account policy which requires all public revenue or funds to be domiciled in the Central Bank of Nigeria.

“Our client presented the Office of the AGF with qualifying information on a cloned account with the Nigerian Ports Authority which was being used to illegally collect revenue from vessels by the signatories who are no longer in the service of the NPA.

“Upon establishing that our client’s information qualified under the whistleblower policy, the Office of the AGF signed a whistleblower agreement with our client through his appointed counsel – Mamman, Maiyaki & CO.

“The information provided by our client eventually led to the exposure of the hidden/concealed funds in Unity Bank Plc to the tune of $1, 034, 515, 000 (One billion, thirty four million, five hundred and fifteen thousand dollars only).”

The whistleblower said the Office of the AGF had been making flimsy excuses as to why the reward was not paid.

He said the Head of Asset Management and Recovery Unit, Mrs. Ladidi Mohammed, informed him that the matter was in court and the plans had changed.

Okuprhe said when asked who filed the suit, she (Mohammed) could not come up with the answer. Also, she could not disclose which court the matter was pending.

He added, “On the next day, one Ms. Bunmi who deputises for Mrs. Mohammed, called our client and asked him to come alone without a lawyer. Upon arrival, she informed our client that there was no pending matter in court on the account.”

The whistleblower said he was told that because the money involved was huge, the Office of the AGF recommended a private firm with which he should enter into a contract to help him get the funds.

The whistleblower said upon the insistence of the AGF’s office, he was made to sign a Memorandum of Understanding with the company to forfeit 60 per cent of his reward.

He said in a dramatic twist, his lawyer was attacked by armed policemen in his office who robbed him and made away with the original copy of the agreement signed with the AGF.

Okpurhe called on the President to quickly intervene as failure to pay him could compromise the whistleblower policy and affect public trust in the government.

The AGF’s Spokesman, Umar Gwandu, did not respond to calls on Saturday.

However, a top source at the AGF’s office said the matter was being investigated by the Department of State Services.

She said, “The AGF has ordered that the case be investigated by the DSS so we cannot speak on the matter for now. The truth is that the whistleblower’s information was not accurate. He is just going about trying to intimidate us.”

Bishop arrested, sent to quarantine unit, for 14days before trial in court over lock-down violation

4,920 Total Views President Muhammadu Buhari had a piece of advice for the Nigerian National Petroleum Company Limited (NNPCL) yesterday: it…