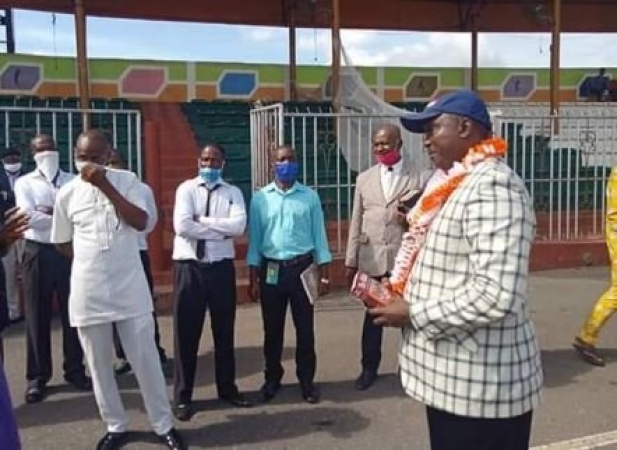 Bishop arrested, sent to quarantine unit, for 14days before trial in court over lock-down violation

A popular Ebonyi cleric, Bishop Dan Obinegbo, and 10 others have been arrested by the State Government COVID-19 enforcement officials for violating restriction orders.

They were arrested on the orders of Commissioner for Internal Security, Border Peace and Conflict Resolution, Stanley Emegha.

The Commissioner also announced the sealing of the church following what he described as an act of disregard and non – adherence to COVID-19 protocol and preventive measures.

Speaking to The Nation after the arrest of the Bishop, Emegha said Governor Dave Umahi banned religious activities in the state but rescinded the decision following pleas from the Christian Association of Nigeria (CAN) and other senior religious leaders.

He said: “One of the conditions is that service must begin and end between 8 am to 12 noon as was agreed with the Christian bodies but regrettably, today, some neighbours alerted us that the General Oversee of Christian Victory Prayer Ministry was as at 2 pm still conducting service”.

He said he immediately moved to the church and “it was observed that the clergy was still conducting service and when we wanted to inquire from him why he should disobey government directive, he insisted we must wait until he is through with his deliverance ministry before he will attend to us”.

The Commissioner stated he had to order his immediate arrest and sealing of the church.

He added that in compliance with the COVID protocols, the Bishop was taken to the Abakaliki Township Stadium where he has been quarantined for 14 days.

He said that after quarantine, he would be prosecuted in line with the COVID law to serve as a deterrent to others that would flout the state government directives.

6,633 Total Views The rate of brain drain in Nigeria medical sectors is becoming too alarming as more Nigeria doctors escape…