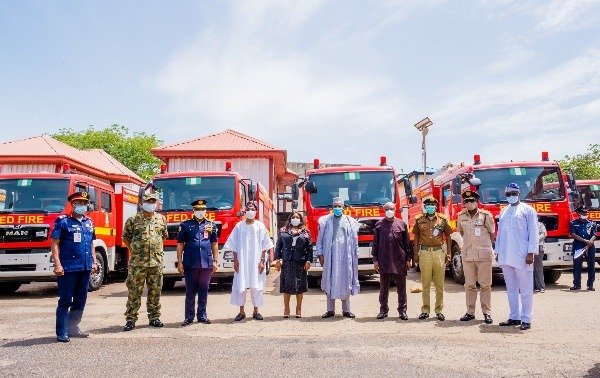 Who ask me to mention the worth of the ten fire fighter trucks, will have been the Ministers innermost thought after been attacked seriously by Nigerians over the purchase of 10 trucks for whooping sum of #1.8billion…. what many considered to be nothing but fraud.

The minister happily shared what he considered to be good news on his twitter handle yesterday, saying “Today I commissioned, 10 Ultra-Modern Fire Service Trucks worth N1.8bn into service of the Federal Fire Service, unfortunately……the feedback he got was not what he bargained for. Instead, many took to various dealers’ website to check the actual cost of a fire service truck.

Reacting to Aregbesola’s tweets, the former ADP Gubernatorial candidate for Lagos state, Babatunde Gbadamosi, asked the minister if he would have spent that much if the money was from his purse.

“$400,000 per truck? @raufaregbesola Would you WASTE this money like this if you WORKED for it yourself?”

Just like Mr Gbadamosi, some commentators also believe that the trucks would have been cheaper if he had purchased them from Indigenous automaker, INNOSON.

The truck in question is a MAN TGM 18.280 FIREFIGHTER TRUCK. On VAN VLIET website, that particular model starts at €195,000.

Some observers as well cross-check the cost of the truck on Aliexpress and the result of their search reveals that the most expensive truck cost $137,000.

Many have continued to call him names and demand EFCC should invite him for questioning.

MTN In Frauds As Customers Lament Over Unsolicited Subscription charges

6,058 Total Views Crisis continue to rock the PDP camp in Osun. A fresh spirited effort to resolve the crisis rocking…

7,737 Total Views The National Chairman of the All-Progressives Congress (APC), Adamu Abdullahi has withdrawn from a suit filed against the…