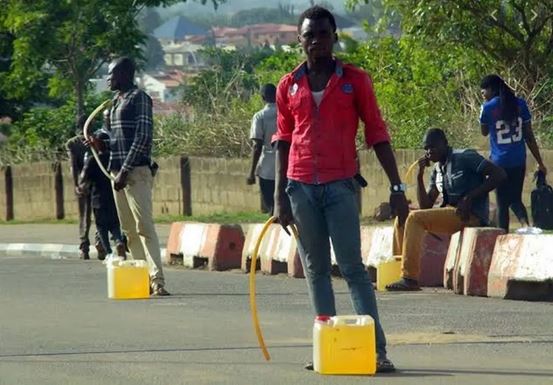 After a very long time of black-market saga in Nigeria, black marketers have finally found reasons to return back to Abuja roads after few days of fuel scarcity. There are widespread petrol queues in Abuja and parts of Niger and Nasarawa states currently.

Also, hundreds of black marketers who sell the commodity in jerrycans are currently in business in some of the affected locations.

Many fillings’ stations were shut to motorists on Monday morning, while the few ones dispensing the commodity were flooded with motorists and other petrol seekers.

The only retail outlet of the Nigerian National Petroleum Corporation on the Kubwa-Zuba Expressway that dispensed petrol on Monday morning was jam-packed with motorists.

Some of the other filling stations on that road and in various locations in Abuja and neighbouring states were not selling petrol.

Attendants in some of the outlets told our correspondent that the threat by Petrol Tanker Drivers to embark on strike triggered the scarcity in the affected areas.

The PTD had to suspend its proposed strike on Monday after the intervention of the Group Managing Director of NNPC, Mele Kyari.

The NNPC had tweeted on Monday that “following GMD #NNPC Mallam @MKKyari’s intervention in the National Association of Road Transport Owners/Petroleum Tanker Drivers impasse, PTD has just announced the suspension of its planned strike until closure of discussion between both parties.

“Also, the GMD announced that there would be no increase in the ex-depot price of Premium Motor Spirit in the month of May 2021.”

The corporation’s boss had also stated that there was enough petrol and urged motorists to refrain from panic buying.

2,664 Total Views Some angry youths in Kano State, on Monday, hauled stones at the advance convoy of the President, Major…

2,088 Total Views The President Muhammadu Buhari and the House of Representatives are on collision course over the deadline for the withdrawal of…