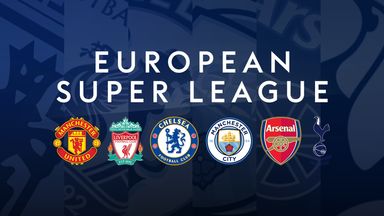 All six Premier League teams involved in the European Super League have formally withdrawn from the competition. Manchester City was the first club to formally pull out after Chelsea had signalled their intent to do so by preparing documentation to withdraw.

The other four sides – Arsenal, Liverpool, Manchester United, and Tottenham – have all now followed suit

The 12-team Super League was announced on Sunday to widespread condemnation.

Manchester City confirmed they have “formally enacted the procedures to withdraw” from the Super League.

Liverpool said their involvement in the proposed breakaway league “has been discontinued”.

Manchester United said they had “listened carefully to the reaction from our fans, the UK government and other key stakeholders” in making their decision to not take part.

Arsenal apologized in an open letter to their fans and said they had “made a mistake”, adding they were withdrawing after listening to them and the “wider football community”.

Tottenham chairman Daniel Levy said the club regretted the “anxiety and upset” caused by the proposal.

English football’s ‘big six’ were part of a group, also containing Spain’s Atletico Madrid, Barcelona and Real Madrid and Italy’s AC Milan, Inter Milan and Juventus, that announced plans to form the breakaway league, which they hoped to establish as a new midweek competition.

It was condemned by fans, football authorities and government ministers in the UK and across Europe by Uefa and league associations.

Around 1,000 fans gathered outside Chelsea’s Stamford Bridge ground before their game against Brighton on Tuesday to protest at their club’s involvement.

Chelsea have yet to release a statement confirming their withdrawal, though BBC sports editor Dan Roan reported earlier on Tuesday the Blues had begun proceedings to pull out of the proposed tournament.

Manchester United executive vice-chairman Ed Woodward, who was involved in the Super League discussions, has announced he will step down from his role at the end of 2021.

Leading players at some of the six clubs signalled their disapproval of the planned breakaway league.

Liverpool captain Jordan Henderson said on social media his side’s “collective position” is they do not want the Super League to take place.

1,041 Total Views ATTORNEY-General of the Federation and Minister of Justice, Mr Abubakar Malami, has disclosed that the Federal Government has…