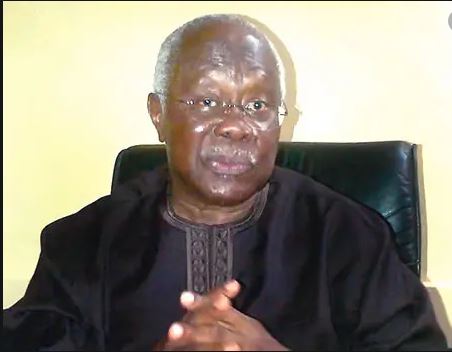 Former Deputy National Chairman of the Peoples Democratic Party (PDP), Chief Olabode George, has called for the permanent dismantling of the Lekki toll gates along the Lekki-Epe expressway and Lekki-Ikoyi link bridge in Lagos State.

He said after the dismantling, a monument should be erected in honour of those who reportedly died in the shooting of #EndSARS protesters last Tuesday.

George who said he was speaking as an elder statesman and not as a party man also called for a thorough investigation into the alleged killing of protesters.

At a press conference in his Ikoyi office in Lagos, the Altona of Oodua of Yoruba land said the uprising witnessed in the state in recent days was a reflection of the “rage and anger” of the youth with the current governance system which he said was not working.

In the address titled, “Lagos State; The Anger and The Rage”, the PDP leader also called for the scrapping of the Lekki Concession Company (LCC) as well as Alpha Beta, a firm allegedly collecting taxes on behalf of the state government.

He said it is high time for a comprehensive audit of the finances of the State Government by an independent audit firm.

Similarly, the PDP leader called for free education from primary to secondary school level in Lagos State and free healthcare services to the needy.

Implementing these demands, he noted, would pacify the angry youths whom he said have no jobs, hope and without any enabling environment.

He condemned the looting and destruction of public properties that trailed the #EndSARS protests in the state, saying his family house was almost touched by the hoodlums but were only resisted by youths of the area.

“When our youths are employed, when obscene pension schemes of immediate Lagos State Governors are scrapped, when everyone is given equal opportunities to exert his God-given talents when the ogre of nepotism and cronyism are removed from our polity, only then we may start the journey towards a national renewal and rebirth,” he said.

He noted that the wealth of the state was not reflective of the infrastructural development, saying it is time for citizens to demand for more accountability in the management of resources of the state.

He added, “Something is terribly wrong. Are some people merely just pocketing all our revenues? If not, the government should explain who is grabbing all these stupendous funds. Definitely the wealth of the state is not reflected in infrastructural development amid the general decay, abandoned projects and various ruination.

“Let me advise that the two Toll gates at Lekki should be dismantled entirely. The Toll gates are now sacred grounds where innocent lives were cut short abruptly. At the Admiralty Circle Tollgate specifically where bullets rained on that black Tuesday 20- 10-2020, a monument should be erected as a permanent memorial to honour the young men and women who stood up in peaceful protests against the ills in our society.

“The protesters were lawyers and doctors. Many were unemployed. There were artists and musicians. There were Yorubas, Hausas, Ibos and all ethnic stripes that make up the Nigerian federation. There were Muslims, Christians and many various faiths.

“Our nation has turned that frightening corner where all conscionable men and women must now choose to stand with the righteous or withdraw into the dark corridor of cowardly little men; unspoken, quiet, huddled in undignified silence.

Our system is not working. Our ethos and norms have broken down. The structures of power are hindering merit and excellence. It is this very anomaly which is much pronounced in Lagos state than any other part of our nation that galvanized the ENDSARS protests.”

4,261 Total Views There were indications at the weekend that Rivers State Governor, Nyesom Wike, and his supporters have returned to…