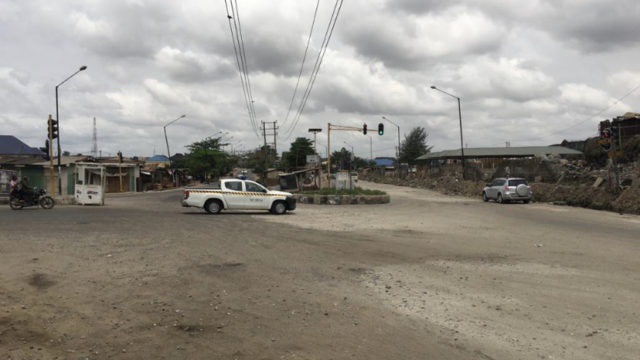 Against the instruction of Inspector-General of Police, Mohammed Adamu who ordered the mobilisation of all police operational assets and resources to bring an end to the violence, killings, looting and destruction of public and private property in parts of the country, evidence shows his order has no weight, as men of the Police force stay off roads in Lagos

Hoodlums in Lagos have been having a field day as they mount roadblocks on major roads to extort motorists.

Aggrieved policemen in most cities have retreated to their barracks following the murder of their colleagues and the torching and looting of their stations by criminals who hijacked the #ENDSARS protests.

Police sources said officers and men felt unappreciated by both the government and citizens that they suffer discomfort to protect.

In Lagos, terrified residents recounted how armed hoodlums mounted roadblocks on all major roads, streets and had a field day extorting motorists.

They mounted scores of illegal barricades, coercing road users to pay between N500 and N1,000 at each roadblock.

Our correspondent who went round some parts of Lagos observed there was no security presence.

From Okota through Cele Bus Stop to Ojuelegba, as well as Daleko and Iyana Isolo, no policeman was seen on the road.

Another resident on essential duty, who left the office around 11 pm on Sunday, relived how ran into thugs as he made to make a U-turn at the Abule Egba Bridge along the Lagos-Abeokuta Expressway.

He said: “I encountered two roadblocks mounted by unclad area boys under the flyover at Abule Egba. I didn’t see any police checkpoints from Oshodi through Capitol Road (Agege axis where I dropped off a colleague) to Iyana Ipaja.

“Approaching the U-turn under the Abule Egbe flyover, two cars that took ‘one-way’ nearly ran into me. As I wondered why they took one-way, I met the first roadblock. I slowed down slightly, expecting to see policemen. Suddenly the boys appeared.

“As they made to surround my car, I sped off and meandered in-between a drum and a piece of wood they placed on the road. Another set of boys waited in front just immediately after the U-turn.

“The first set of boys chased after me, screaming to alert the others ahead. Other boys came out of their hideouts. I increased speed as I turned, tyres screeching.

“They had piled old tyres just after the U-turn, expecting me to stop or slow down…but I drove through the tyres. Fortunately, nothing heavier was placed on the road to stop me. God knows what would have happened if they had succeeded in stopping me.

“A heavy stick landed on the car as I raced away. The stick missed the windscreen and windows by inches.

“The U-turn is usually well lit, with a police checkpoint, but it was in darkness Sunday night and policemen were nowhere in sight.”

He denied that there were no policemen on the streets.

Mba said: “There are massive operations ongoing simultaneously in several states of the federation aimed at reclaiming the public space from hoodlums.

“In line with that operation, our deployment strategy has been very methodical. It is intelligence-driven, target-oriented and purposeful. What I mean is that we are deploying in areas most importance.

“If there is intelligence, for example, indicating that a particular place is about or likely to be attacked, then it becomes important that we strengthen the security around those areas and reduce the vulnerability of the target. That is what we are doing.

“We are conducting street patrols and at the same time concentrating our operations on areas we consider vulnerable.”

Naira Marley, Gbadamosi soon to be arraign in court over lockdown violation

4,175 Total Views There were indications at the weekend that Rivers State Governor, Nyesom Wike, and his supporters have returned to…