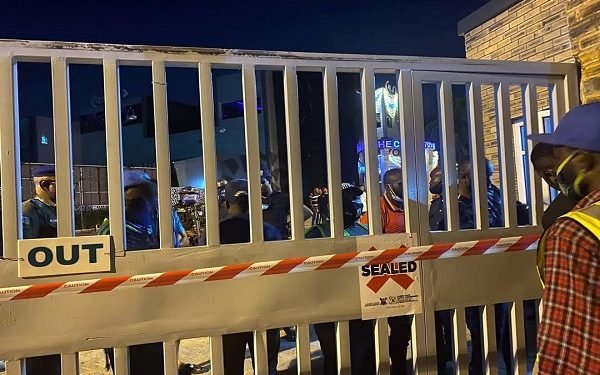 About 200 clubbers and workers were Saturday night arrested at popular Cubana Night Club for alleged breach of COVID-19 protocols.

Detectives attached to the Inspector General of Police (IGP) Monitoring Team at the wee hours of Saturday, busted the gathering following a tip-off on a large gathering in the clubhouse.

Saturday’s raid was the third, since last year, that the state and Federal Governments announced the temporary closure of relaxation spots in order to minimize the spread of the coronavirus disease.

Although hotels, eateries, churches, and some beaches have since resumed businesses following the ease of the lockdown, clubhouses have remained closed.

To minimize losses, the government earlier permitted clubhouses with open bars and restaurants like Cubana to resume such services with strict observance of all COVID-19 protocols.

Rather than stick to the open bar arrangement where guests can be served drinks and grills while listening to music including live bands, police sources claimed Cubana opened its nightclub and allowed guests in, where they were allegedly caught dancing with no regard to the social distancing policy.

“About 200 clubbers and fun-seekers were arrested on Saturday at Cubana Night Club, Lagos. They have been handed over to the Lagos Police Command for investigation and possible prosecution.

Contacted, police spokesman, Olumuyiwa Adejobi confirmed that suspects were handed over to the command by the IGP Monitoring unit, adding that they would be paraded by the Commissioner of Police (CP) Hakeem Odumosu.

2,453 Total Views Troops of the Nigerian Army, Airforce and other security agencies have rescued Maj. Christopher Datong, the officer abducted at…

1,864 Total Views Yoruba nation agitator, Chief Sunday Adeyemo (aka Sunday Igboho), on Thursday, warned that no one should use his…