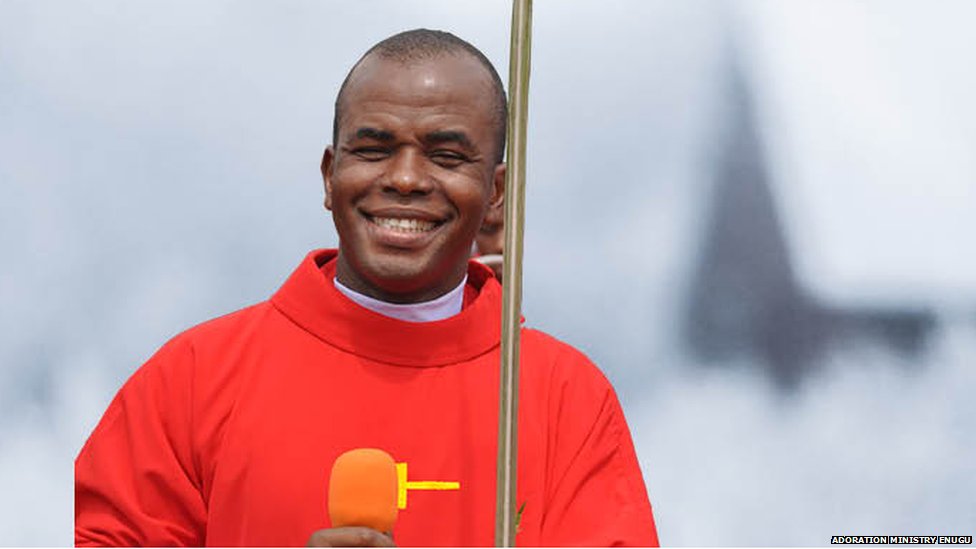 WORSHIPPERS at the Adoration Ministry, Enugu, kicked against the transfer of the head of the ministry, Reverend Father Ejike Mbaka, to the monastery.

The transfer saw Reverend Father Anthony Amadi brought to the ministry to replace Mbaka. Followers of the cleric barricaded the church premises and refused to let Father Mbaka leave.

They were also heard speaking in anger against the Bishop of the Enugu Diocese, accusing him of moving Father Mbaka to a monastery to silence him.

The Catholic Church had reopened the church for service on Sunday.  Defending the decision to move Mbaka to monastery, the Enugu Diocese, through the Diocesan Director of Communications, Father Achi, said the Very Reverend Father Ejike Mbaka was not removed from the Adoration Ministry as suggested.

Rather, according to Father Achi, since it was recommended that Father Mbaka take time away in solitude in order to listen to what the Spirit of God has to tell him, he was allowed to propose a priest to administer, in the interim, to the faithful at the Adoration Ministry.

With the approval of his Bishop, on October 2, 2022, Father Mbaka introduced Father Amadi to the worshippers.

“Unfortunately, some people were still not pleased and would prefer that Father Mbaka remains.

“What every true Christian and especially every true Catholic, should do at this moment is to commit our dear brother and priest, Father Mbaka, to God in prayer so that he may, through this moment, encounter God specially, come out stronger and better in recognising His will for him and gain more graces to channel those rare gifts for His glory and for the sanctification of the people of God and society at large.

“The Church loves Father Mbaka and cherishes him as an illustrious son.  “May our Mother Mary, the Queen of all Apostles, intercede for him. Amen,” he prayed.

Nigerian Tribune had earlier learnt that the Adoration Ministry, which was shut down three months ago, was reopened on Sunday for worship before the transfer of Father Mbaka to monastery surfaced.

In the place of Mbaka, another cleric of the Catholic Diocese of Enugu, Amadi, was posted to take charge of the Adoration Ministry.

A top member of the ministry who confirmed the posting to the Nigerian Tribune said the development was unfortunate.

According to him, “all along, the Bishop of the Enugu Diocese, Most Reverend Callistus Onaga, had been trying to take over the Adoration Ministry. But I can assure you that no priest will succeed here. So long as Father Mbaka is not there, nobody will come there to worship.

“This will lead to anarchy. It’s unthinkable that this kind of harsh decision could be made. We the adorers will never accept any other priest.

“Father Mbaka suffered and built that place. Now they have tactically hijacked the place through the backyard. Let’s see how they will succeed.”

The chieftain, who spoke on condition of anonymity while reacting to the transfer of Father Mbaka from the Adoration ground to the monastery, advised both parties to resolve their differences with the fear of God, noting that the Catholic Church is a secret place of the Most High God that ought not be used for political campaigns.

According to the chieftain, “Catholic Church has its rules and regulations. They are very secretive in their dealings.

“My advice to the Enugu Diocese is for them to distant Peter Obi from their misunderstanding to enable him concentrate on his presidential campaign activities.”

He also advised the Diocese not to allow politicians redirect the minds of Catholic faithful in the southeast region.

297 Total Views Union Bank of Nigeria has launched a brand-new sonic identity tagged ‘The Sound of Union. At 105 years,…

2,737 Total Views Four officers of the Nigerian Navy have reportedly attacked an anti-robbery police patrol team in Satellite Town, a…