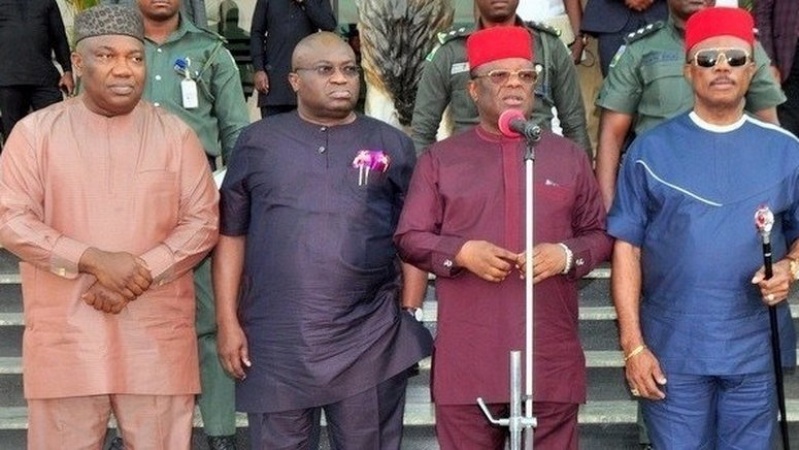 The South-East Governors Forum has decided that compulsory COVID-19 tests will be conducted on teachers in all schools in the zone before the reopening of schools.

The Chairman of the forum and Ebonyi Governor, Chief Dave Umahi made the disclosure in Abakaliki on Sunday while briefing newsmen after a virtual meeting of the forum.

The meeting was also attended by some National Assembly members from the zone, Ohanaeze Ndigbo leaders and other stakeholders.

According to him, lots of fears were expressed especially for the kindergarten and primary school levels where the pupils for instance, do not understand what is social distancing.

“This is because they love themselves and must always stay together and a part of the protocols of the Nigeria Centre for Disease Control is that people must wash their hands with running water.

“You will ask how many of our schools have running water and how many sanitisers have been provided for them.

“It is rainy season presently and most schools are bushy and have been abandoned since March due to the outbreak of the COVID-19 pandemic,” he said.

Umahi said that the forum decided to review school infrastructures in the zone to support NCDC protocols and subsequently wait for the Federal Government to have their final say on school re-opening.

“We will then review our position and tell our people the safest time to re-open schools with our health workers sent to enforce the NCDC protocols,” the governor said.

The governor expressed the zone’s gratitude to President Muhammadu Buhari for the ‘speedy’ work on the second Niger Bridge and the renovation of the Akanu Ibiam international airport.

“The second Niger bridge project is on course and we are told that by July 2022, it will be handed over to us with its adjoining 44 km of roads.

“The Aug.30 handover deadline for the Akanu Ibiam International Airport as issued by the Minister of Aviation is also on course as lots of jobs have been done, including the cargo section,” he said.

The News Agency of Nigeria (NAN) reports that Anyim, who was also a former Secretary to the Government of the Federation (SGF) and Eze have recently been engaged in a media ‘war’.

This led to casting aspersions on each other to the consternation of the public.

Umahi disclosed that the forum directed the pan-Igbo organisation to meet both Igbo leaders to ensure a lasting end to the feud.

“The organisation should ensure that both illustrious sons of ‘Alaigbo’ (Igbo land) ‘cease-fire’ immediately,” he said.

The governor noted that the forum also appealed to the press not to exacerbate the misunderstanding between ‘two brothers’. (NAN)

3,158 Total Views Labour Party presidential candidate, Peter Obi has cautioned his supporters and loyalists against being toxic, urging them to…