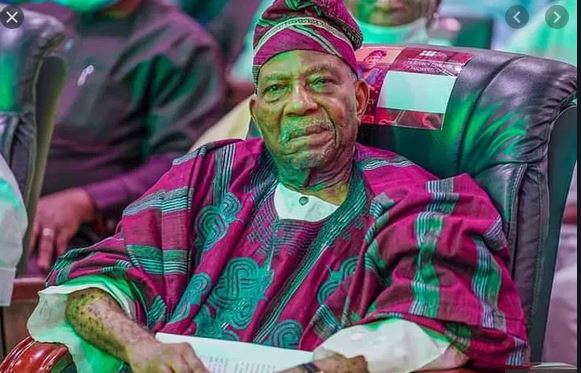 Leader of the Yoruba socio-cultural group, Afenifere, Chief Reuben Fasoranti, has stepped down.

The 95-year-old eminent Yoruba leader cited old age among his reasons for stepping aside as leader of the group he led since 2008.

He said: “Afenifere now needs more than ever before to have an improved organisation with a more effective approach to issues.

“Only a more agile and active leadership can achieve this. At 95, I am hardly able to provide such, and so, it is time for me to step aside.

“At this point, let me take a break and make an important point. Whatever has been achieved by Afenifere has been by collective leadership. The leader in Afenifere works according to the leadership model.

“In this respect, I want to pay special tribute to all my colleagues in Afenifere, most especially two of them: the late Chief Olaniwun Ajayi and my good brother and friend, Chief Ayo Adebanjo. They both worked so hard to keep Afenifere up in the times of the travails. The passage of Chief Ajayi did not impact negatively on the commitment of Chief Adebanjo towards all that Afenifere stands for.

“Chief Adebanjo’s efforts stand him out as a deep lover of Afenifere and the Yoruba people. He has been in the trenches all his life.”

Adebanjo became Acting Leader of Afenifere while Oba Oladipo Olaitain, the Alago of Kajola Ago in Atakomosa East Local Government Area (Ilesa) of Osun State, was announced as the Deputy Leader.

The congress concluded that the monthly meeting of Afenifere would continue to hold in the Akure home of Pa Fasoranti.

Reading a communiqué issued at the end of the meeting, Chief Korede Duyile said the new leaders were capable of leading the group.

The communiqué described Chief Adebanjo as a progressive who had been in the Chief Obafemi Awolowo fold.

It urged all governors of the Southwest states to give the Southwest Security Network, named Amotekun, the necessary bite to carry out its duties.

The group also urged the Federal Government to set machinery in motion for the activation of state police across the country.

The communiqué added that the argument that governors would abuse the use of state police was not tenable.

INSECURITY: APC is reaping what they sow - Wike

4,512 Total Views Some angry youths in Kano State, on Monday, hauled stones at the advance convoy of the President, Major…

3,936 Total Views The President Muhammadu Buhari and the House of Representatives are on collision course over the deadline for the withdrawal of…