Home > slideshow > INSECURITY: APC is reaping what they sow – Wike 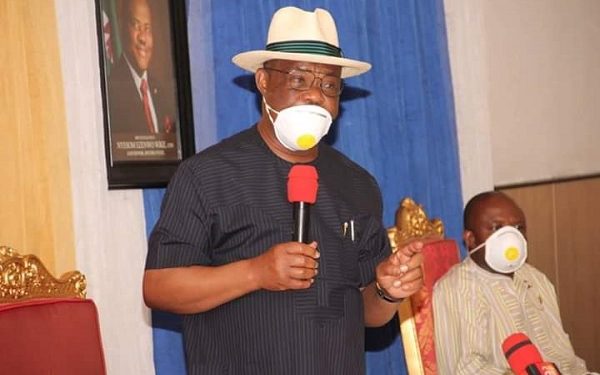 The Governor of Rivers State, Chief Nyesom Wike, has explained that the reason banditry would not end was that the All-Progressives Congress, APC- led Federal Government has continued the politicization of security.

“They’re paying the price. Whatever you sow, you will reap. If you sow peace, you’ll reap peace, if you sow trouble, trouble will always be with you.”

Wike said by politicizing insecurity, the APC Government plunged the security troubled states into an unimaginable scale of banditry that may not end soon.

The governor disclosed this in a statement by his Special Assistant on Media, Kelvin Ebiri.

Wike explained that when Rivers experienced issues of insecurity in 2015, he ran to the FG but instead of support, the FG dismissed it as politics out of hatred for the State and desire to see the state remain ungovernable.

He said: “They didn’t send special forces to Rivers as they’re sending to other states now. They refused to support me because they didn’t want the State to be governable.

“Crime knows no boundary. It can be you tomorrow. If they had brought out zeal to fight crime, with seriousness, and collaboration irrespective of the party you belong to, good result will be achieved.

Wike said it is difficult to fight crime in situations when cultists are arrested, people go to Abuja to tell the Inspector General of Police(IG) and the Chief of Army Staff that those arrested are their boys just to secure their release and let them off the law.

Governor Wike commented on the denials trailing the $1billion Dollar withdrawn from the Excess Crude Account and said it is shameful that a government that is fighting corruption will condole such, allowing both the money and the weapons to go missing, unaccounted for.

“Now, the National Security Adviser says the $1 billion they took from our Excess Crude Account without even paying us our 13 per cent derivation is gone.

They said they’ve not seen the weapons. “But this one the National Security Adviser is saying that they misquoted him. I tell you, nobody is misquoting anything.

We are aware that there was no weapon. “Even the Chief of Army Staff said he didn’t collect money. So where did the money go?

This is a government fighting corruption and the press is not talking,” he said.

God made me Governor not Man - Seyi Makinde

3,624 Total Views Breaking from a century-old tradition in the name of health and safety, the largest convention organization in the…