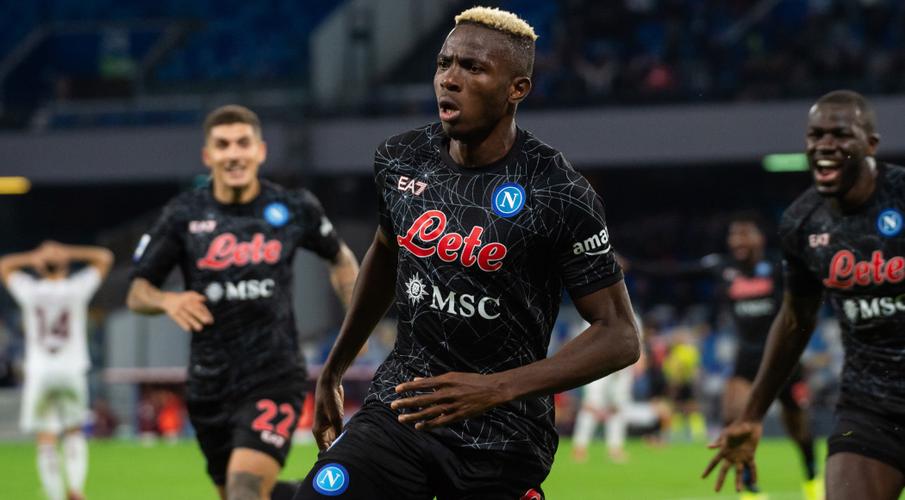 A late Victor Osimhen’s towering header sealed a hard-fought 1-0 for Napoli which saw them record their eight consecutive win in the Serie A this season, Completesports.com reports.

Napoli are now the only team in Europe’s top five leagues with a 100 percent record and reclaims first position from AC Milan as they have 24 points.

Also in action in the encounter was Osimhen’s Super Eagles teammate Ola Aina who played for 90 minutes.

It was Osimhen’s fifth goal in seven appearances so far in the Italian elite division this season.

Osimhen now has eight goals in nine games in all competitions for Napoli.

With nine minutes left in the game, Osimhen emerged the hero for Luciano Spalletti’s dominant side.

Kalidou Koulibaly’s back-heel flick sent Dries Mertens down the left, his cross was charged down, then Eljif Elmas deflected the attempted clearance for the ball to bounce up and the Nigerian hung in the air to nod past the Torino keeper.

Napoli would have scored in the 27th minute after they were awarded a penalty but Lorenzo Insigne saw his effort saved.

It was Insigne’s third miss out of five attempted penalties this season.

In the 56th minute Napoli had the ball in the net with a smart free kick routine, Mario Rui whipping the ball across the six-yard box for Di Lorenzo’s header. However, after a very long VAR check, it was ruled marginally offside.

4,528 Total Views Some angry youths in Kano State, on Monday, hauled stones at the advance convoy of the President, Major…

3,952 Total Views The President Muhammadu Buhari and the House of Representatives are on collision course over the deadline for the withdrawal of…