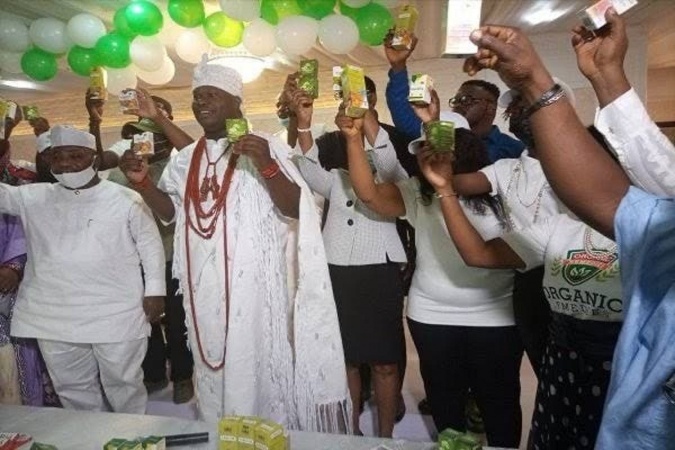 The Ooni of Ife, Oba Adeyeye Ogunwusi, has unveiled a series of traditional medicines, made from local herbs, that boost human’s immune system against infectious diseases, including the rampaging Coronavirus (COVID-19).

The product launch, which held at the Ile Oodua Palace of Ile-Ife on Thursday, was done through a platform called Herbal Remedies with the Ooni as the Chairman, in partnership with ace traditionalist, Dr. Akintunde Ayeni, C.E.O/Chairman of YEMKEM International LTD.

Addressing newsmen, the Ooni wondered why the African continent imports medicines and other medical ingredients from developed countries.

According to him, it is a proven fact, which is equally established by the World Health Organization, that Africa has the best herbs which can be used for vaccine production.

“We are not doing this in isolation and I am happy to inform you that the National Assembly is currently working on a bill submitted by the Federal Executive Council.

“The bill has passed through several legislative procedures and shall be passed into law very soon, “ he said.

The Ooni said a foundation has been launched for indigenous research-based initiatives in traditional medicines.

“I am very honored to be in partnership with the oldest, YEMKEM International, which has been in the industry for the past 40 years.

“He owns the largest (herbal medicine) production plant in Nigeria; We have been on this for over one year during which we have worked with various stakeholders in the health sector, including the National Agency for Food Drug Administration and Control (NAFDAC).

“To the glory of God, NAFDAC gave us all the approvals last September but I insisted that the products be packaged properly.

“To the glory of God, these products have been tested, especially on thousands of COVID-19 patients, including some in positions of authority who are currently free from the pandemic,’’ the Oba said.

He disclosed that their focus was to employ 100,000 youths within the next fifteen months.

In his goodwill message, the Senior Special Assistant to the President on Job Creation, Mr Afolabi Imoukhuede, commended the Ooni over the innovation, adding that many youths would be engaged productively.

“If you study the value chain associated with this innovation right from the cultivation of herbs, production, packaging, and distribution, it is obvious that many jobs will be created and countless doors of opportunities opened for our youths,’’ he said.

In the same vein, the Chairman of YEMKEM, Dr. Akintunde Ayeni, described the development as his greatest achievement in his over 40 years of practice.

Ayeni explained that such landmark achievement was more spectacular because it is coming from Ile-Ife, the “source of mankind’’.

“It was not easy and I wish to state that the Ooni, who conceived the idea, gave us all the support, including huge sums of money.

“He has been supportive morally, financially, and spiritually and I appealed to other monarchs to emulate these good virtues,” Ayeni stated.

Speaking on behalf of the Commissioner, Osun State Ministry of Health, Mr. Gbenga Adepoju, pledged the government’s support for the products, noting that the country had what it would take to solve her problems.

Adepoju, who is the Director of Public Health in the Ministry, said Ooni’s effort in the development of a vaccine against COVID-19 was a huge addition to the government’s effort.

“As we keep fighting against this common enemy, I want to implore us to keep observing the COVID-19 protocols, including wearing of nose masks, observing social distancing, and maintaining personal hygiene.”

In their separate speeches, NAFDAC Director-General, who was represented by the agency’s Director of Public Affairs, Mr. Jimoh Abubakar, commended the fatherly role of Ooni in ensuring that the citizenry enjoys qualitative health.

Also, the Standards  Organisation of Nigeria (SON), represented by Mr Gideon Amosun, declared the organization’s support for the innovation, applauded the frontline African monarch over the medical breakthrough.

Another Davido Friend DJ Olu, Found Dead In His Car

2,211 Total Views Former Governor of Ekiti State, Ayo Fayose, has said that the election of the South-west zonal congress of…