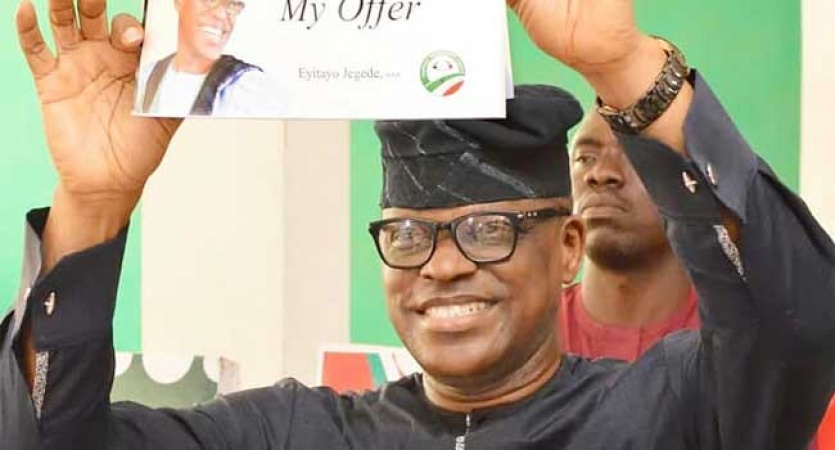 Eyitayo Jegede has emerged as the Peoples Democratic Party (PDP)’s flag bearer for the Ondo State governorship election which is expected to take place on October 10.
Jegede was on Thursday announced as the winner after the delegates cast their votes at the party’s primary which held at the International Culture and Events Center, the dome in Akure, the state capital.
He polled 888 votes to defeat his closest rival and incumbent Deputy Governor of the state, Agboola Ajayi who garnered 657 votes and other seven aspirants.
The other aspirants include Eddy Olafeso who polled 175 votes, Banji Okunomo who polled 90 votes, Olabode Ayorinde who polled 95 votes and Boluwaji Kunlere who polled 33 votes.
While Olusola Ebiseeni and Godday Erewa polled 29 and 14 votes respectively, the total number of invalid votes stands at 64.
After gathering the highest number of votes in the indirect mode adopted by the party, Chairman of the PDP Primary Election Committee and Governor of Enugu State, Ifeanyi Ugwuanyi declared Jegede the winner of the exercise.
Also present at the primary is Adamawa State Governor, Ahmadu Fintiri among other members.
With this development, Jegede will now battle the candidate of the All Progressives Congress (APC) and incumbent governor, Rotimi Akeredolu in the governorship election which is barely three months away.

Joshua not an Elite Group heavyweight fighter, only Brits thinks so – Fury Promoter

5,742 Total Views President Muhammadu Buhari had a piece of advice for the Nigerian National Petroleum Company Limited (NNPCL) yesterday: it…