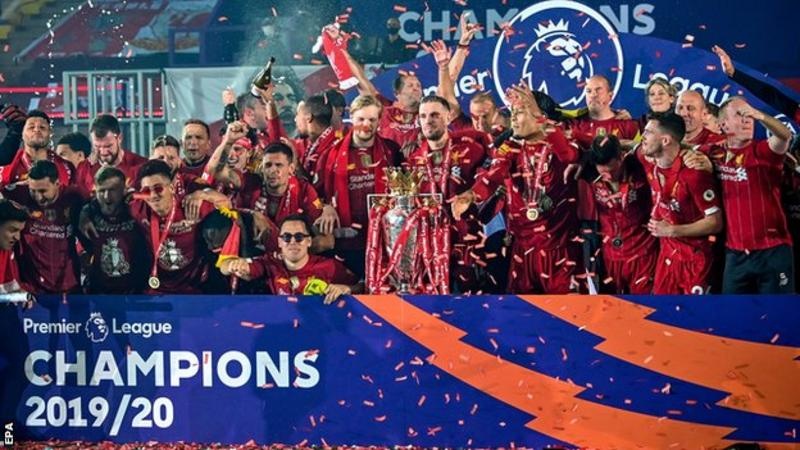 THE joy on the faces of Liverpool players on Wednesday can be compared to non, not after the trophy came after 30 years of struggles. Though it all took place in an empty Anfield stadium, but it was a stunning moment for the club as the team captain Jordan Henderson on Wednesday night lifted the Premier League trophy.

Henderson received the trophy from Reds legend Sir Kenny Dalglish, who was manager when Liverpool last won it in 1990, during a spectacular ceremony after the champions beat Chelsea 5-3 on Wednesday.

Liverpool were confirmed as champions of England on 25 June with seven games to spare when nearest rivals Manchester City lost at Chelsea, but they had to wait until their final home game of the season to be presented with the trophy.

There were no supporters in their 53,000-capacity Anfield home after the Premier League season resumed on 17 June behind closed doors following a three-month suspension due to the coronavirus pandemic.

Merseyside Police had warned fans not to repeat the widespread gatherings that took place on the city’s waterfront after the club’s title win last month, amid fears of a spike in infections, and Reds boss Jurgen Klopp urged supporters to celebrate at home.

A small group of fans, some with red flares, greeted the team coach when it arrived at the ground before kick-off, while fireworks were set off outside Anfield throughout the match.

During the game, Merseyside Police announced they had put in place a dispersal order between 21:30 BST today and 21:30 BST on Friday as they anticipate large crowds gathering in Liverpool after the club lifted the trophy.

Dalglish, who scored 172 goals in 515 appearances as a Liverpool player between 1977-1990, handed out medals to each player during a ceremony which involved a light show, pyrotechnics and a lot of emotions on display.

Liverpool chief executive Peter Moore said players and fans will “come together to celebrate” the title “when the time is right”. (BBC)

13,501 Total Views Lagos, Nigeria – Union Bank of Nigeria is pleased to announce that it has received high ratings in…