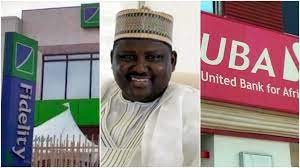 Justice Abang regretted that UBA and Fidelity banks, which aided Maina in defrauding the Federal Government, were not joined in the charge. He said their operating licenses ought to be seized for allowing themselves to be used to defraud the pensioners, some of whom have died while waiting for pensions.

Maina, who was remorseful after the judge convicted him, apologized for all his mistakes. However, in his allocutions, said if he were allowed in the dock, he would have made some useful revolutions.

The judge said the United Bank for Africa (UBA) and Fidelity Bank Plc were used by Mr Maina as “conduit” to defraud pensioners.

Noting that the convict’s fraudulent activities “ruined” many homes in the country, Mr Abang said the two banks ought to have been charged alongside Mr Maina for serving as “conduits” through which the stolen funds were channelled.

“UBA and Fidelity Bank Plc should have been arraigned with the convict for illegal transactions,” Mr Abang held, adding that “their licences ought to have been withdrawn.”

“The banks benefitted from the proceeds of illegal transactions. UBA and Fidelity Bank provided the channels with which the convict (Mr Maina) used in defrauding the federal government,” Mr Abang also said.

He said the banks abdicated their responsibilities by failing to carry out due diligence to establish the true identities of persons in whose names Mr Maina opened and operated the fictitious bank accounts.

The court noted the prevalence of monumental financial fraud in Nigeria’s public sector, calling for drastic measures to tackle the problem.

“The facts of this case portray the moral decadence of the society we live in. I think we need a National rebirth of guaranteed regeneration,” the judge said.

Mr Abang said while the convict lived in opulence at the expense of pensioners, his victims died in penury in Nigeria.

“Having considered the monumental fraud of how the pension funds were stolen, over N2.1 billion by the 1st Defendant (Mr Maina), it is a clear case that the convict is inhumane, heartless and has no compassion for the pensioners.

“Meanwhile, the convict, through the assistance of UBA and Fidelity Bank Plc, deprived the pensioners that gave their all to this country in their youthful age, their legitimate earnings.

“Whereas the convict was feeding fat on their sweat faraway in Dubai, the United Arab Emirates (UAE), buying choice properties, driving bulletproof cars, living in affluence beyond his legitimate earnings.

“An abnormal situation requires drastic actions to send a message to those that believe in dishonesty to have a rethink; turn a new leaf.

Nigerian Govt to spend $8 on two doses of vaccine

2,853 Total Views Netflix will begin blocking subscribers from sharing their account passwords with people outside of their household in the…