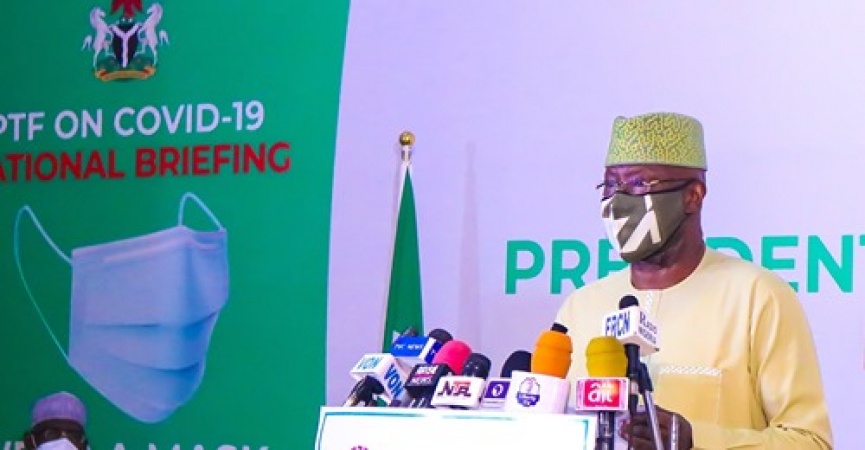 Mr Boss Mustapha, Chairman, Presidential Task Force (PTF) on COVID-19 and Secretary to the Government of the Federation, said Nigeria recorded four cases of COVID-19, B117 variant strain, first reported in the UK.

The PTF chairman made the disclosure at a national briefing on Monday in Abuja.

Mustapha said; “over the last few weeks, the PTF had been closely following the rising number of infections reported daily in Nigeria and in other jurisdictions.

“Similarly, our scientists have been sequencing the variants of the virus.

“There have been reports of cases with the B117 variant strain first reported in the UK, found in Nigeria. Three of these were in travellers out of Nigeria and one in a resident,”.

“All these numbers represent increases from the previous seven days and we are looking at taking further public health containment measures in local government areas that are considered a high burden,” he explained.

On the activities of the PTF in managing COVID-19, the PTF chairman said:  “The management of cases is gradually improving with the availability of medical oxygen. Government is also fast-tracking the rehabilitation of existing plants and construction of new ones as approved by the President.

“The PTF has advanced in the deployment of resources for the national testing week and continues to review the bottlenecks affecting the turnaround time for testing.

“The PTF is improving on the International Travel Portal to minimise the challenges passengers keep encountering,” he said.

“In view of the fact that our numbers are not abating, all extant measures prescribed in these guidelines are (subject to some modifications) extended by a period of one month with effect from Tuesday, Jan. 26,” he said.

On vaccines, he said the expected 100,000 doses would arrive the country in early February.

According to him, the effort to access and deploy vaccines are progressing and as already announced by COVAX, the initial 100,000 doses Nigeria is expecting will now arrive in the early weeks of February.

“We wish to assure all Nigerians that the vaccines will be safe and effective when eventually it is deployed. We enjoin everyone to join in the campaign to eliminate vaccine hesitancy.

“I have to however, advise all Nigerians that the only source of vaccines that is safe and effective in Nigeria is through the channels of the National Primary Health Care Development Agency (NPHCDA) Please do not patronise anyone hawking or marketing vaccines,” he added. (NAN)

Amaechi enjoys workers accolade as he returns back to office

3,062 Total Views Some angry youths in Kano State, on Monday, hauled stones at the advance convoy of the President, Major…

2,486 Total Views The President Muhammadu Buhari and the House of Representatives are on collision course over the deadline for the withdrawal of…