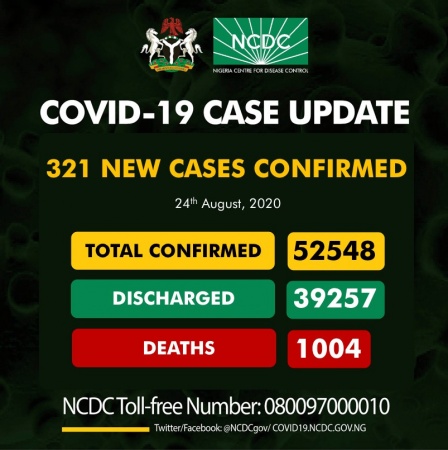 Ahead of the resumption of international flights at the nation’s airports, Nigeria has reported 321 more cases of coronavirus (COVID-19).

The Nigeria Centre for Disease Control (NCDC) announced the figure in a late-night tweet on Monday.

This brings the total number of confirmed cases in the country to 52,548, while the latest figure is just a case lower than the tally reported in the previous day.

The NCDC noted that the additional cases were reported from 23 states of the federation and the Federal Capital Territory (FCT).

Although the total number of confirmed positive cases of COVID-19 in the country is near the 53,000 mark, more people have continued to recover from the disease.

Data released by the NCDC in its latest update on the outbreak revealed that additional 321 infected patients have been successfully treated and discharged from various isolation centres in the country.

However, the death toll from the disease which is now 1,004 has continued to increase, although at a slow pace.

Despite crossing the 1,000 mark on Sunday, the Presidential Task Force (PTF) on COVID-19 has insisted that Nigeria has continued to record a steady decline in its Case Fatality Rate (CFR) over the last few months.

334 Total Views Union Bank of Nigeria has launched a brand-new sonic identity tagged ‘The Sound of Union. At 105 years,…

2,774 Total Views Four officers of the Nigerian Navy have reportedly attacked an anti-robbery police patrol team in Satellite Town, a…