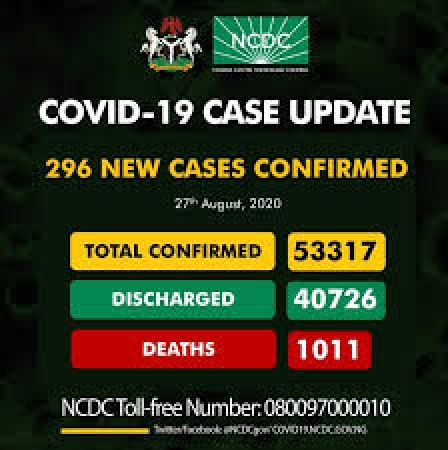 Two hundred and ninety-six more cases of coronavirus (COVID-19) have been recorded across the country. The Nigeria Centre for Disease Control (NCDC) announced this in a late-night tweet on Thursday, while giving an update on the pandemic.

It noted that the cases were reported from 16 states of the Federation and the Federal Capital Territory (FCT).

Plateau State topped the list of states with new cases, reporting 85 more infections having been considered the new epicentre of the disease in the country.

The latest number of cases is 75 higher than the 221 reported in the previous day – which was seemingly the lowest figure recorded in the country in about three months.

This brings the total number of confirmed COVID-19 cases in the country to 53,317, while the death toll from the virus is 1,011 following the death of one more patient.

However, 445 more people were successfully treated and discharged from various isolation centres in the country in the last 24 hours.

Earlier, the Presidential Task Force on COVID-19 said it has concluded plans to launch the Transparency Initiative Dashboards.

The PTF Chairman and Secretary to the Government of the Federation (SGF), Mr Boss Mustapha, described the development as a significant milestone for the nation.

According to him, it puts valuable information at the disposal of every Nigerians and explains the presence of the development partners in the effort to curtail the spread of the disease.

Mustapha stated that it was exactly six months ago that the Minister of Health broke the news of Nigeria’s index case of coronavirus.

8,204 Total Views Governors in the camp of the Rivers State Governor Wike yesterday boycotted the inauguration of the Peoples Democratic…