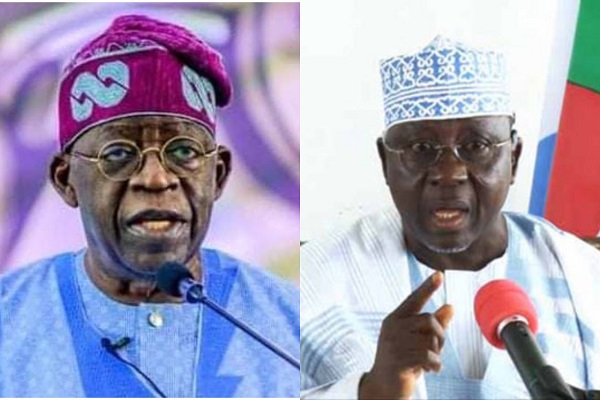 Former Nasarawa State Governor Umaru Al-Makura yesterday said none of the presidential candidates for the February 25, 2022 poll was a match for the Progressives Congress (APC) standard bearer.

Al-Makura listed Tinubu’s achievements as Lagos State Governor between 1999 and 2007, his roles in the restoration of democracy in the country and human capital development as qualities that make him tower above his rivals.

He also said the APC candidate had taken after Nigeria’s First Republic leaders, including Sir Ahmadu Bello, Chief Obafemi Awolowo, and Dr.Nnamdi Azikiwe, who, he said, were mentors of men.

Al-Makura, an APC senator representing Nasarawa South, said he believes strongly that a combination of Tinubu and Kashim Shettima would put Nigeria on the path of progress and development.

His words: “Take the pairs of all the political parties’ presidential candidates and their running mates. You cannot find any of them that can come close to the combination of Tinubu and Shettima.

“Take them one by one and compare them with any of the two pairs in other parties. You won’t go far before you realise that it is not a contest.

“Take Tinubu and what he has done in Lagos State and the country physically, politically, socially, culturally, and economically, I do not see any presidential candidate that can match his competence, achievements, and vision.”

The former governor added that  in terms of defence of democracy, none among 17 other candidates can be described as defender of Nigeria’s democracy than Tinubu.

Al-Makura recalled that “in the course of trying to defend Nigeria’s democracy, Tinubu had to flee the country,” adding that “Tinubu and others stood their guns to ensure that democracy was rooted in the country.

The lawmaker added: “How many brave Nigerians could do what Tinubu has done to this country way back in 1993? He sacrificed his time and comfort for the sake of democracy.

“For that alone, he has no equal among the presidential candidates. Take infrastructural development and transformation of Lagos. This man with his vision and ideas made Lagos a centre of excellence.

“And it is not only Lagos that benefited from his wisdom, but another revenue that is being generated from Lagos is also part of the contribution to the national economy

“Look at the way he mentored people. I call him a mentor of mentors. You can liken Tinubu to our leaders of the First Republic.

“The Sardauna (Bello), Awolowo, and Azikiwe, who made people what they were at that time.

“And this, to me, is a leader that is cut in their image. Talk about any prominent Nigerian.

309 Total Views Union Bank of Nigeria has launched a brand-new sonic identity tagged ‘The Sound of Union. At 105 years,…

2,749 Total Views Four officers of the Nigerian Navy have reportedly attacked an anti-robbery police patrol team in Satellite Town, a…