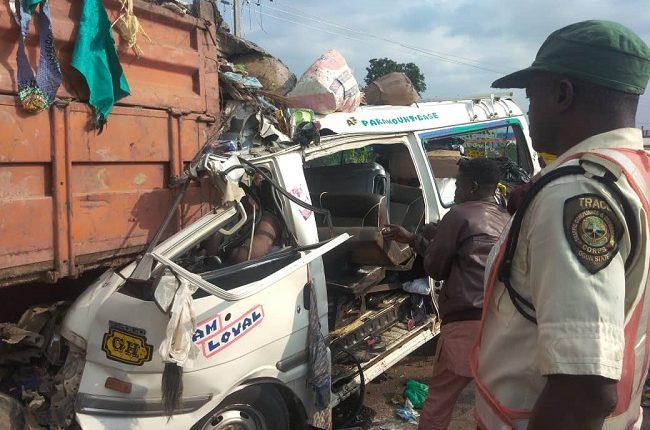 The ugly incident, according to information provided by the Public Relations Officer of the Traffic Compliance and Enforcement Corps (TRACE), Babatunde Akinbiyi, was a result of wrongful overtaking on the part of the driver of a commercial bus with registration APP 28 YE. This led to the loss of control while the ill-fated vehicle rammed into a stationary waste disposal truck.

According to Akinbiyi, the accident occurred at 4 pm.

Twelve out of the 25 passengers were seriously injured and taken to hospital for medical attention.

The deceased were deposited at a private morgue in Sagamu.

“We learnt the commercial bus was coming from Lagos when it overtook the vehicle in front of it wrongly before ramming into a stationary vehicle at the roadside killing nine persons in the vehicle on the spot.

“The remaining four died at Idera Hospital where they were taken to by TRACE and Federal Road Safety Corps (gravy) officials.

“TRACE Corps will continue to insist that the roadside is not a mechanic workshop where cars should park or be repaired for whatever fault because of its attendant consequences,” Akinbiyi said.

4,361 Total Views Netflix will begin blocking subscribers from sharing their account passwords with people outside of their household in the…