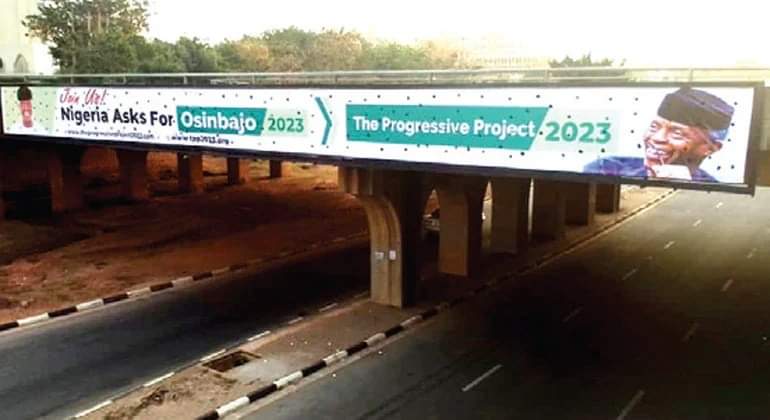 Large campaign billboard with the name and picture of Vice President Yemi Osinbajo has emerged in Abuja, the nation’s capital.

This is amid talks of Osinbajo’s interest in succeeding President Muhammadu Buhari in 2023 despite bigwigs like National Leader of the All-Progressives Congress, Bola Tinubu, and former President Goodluck Jonathan showing interest in the race.

This came amid rumor of calculate plot on how Buhari is plotting to bring his predecessor, Jonathan, to occupy Aso Rock Villa in 2023 for the North to have power back in 2027.

However, Osinbajo, who is serving his second term of four years as Vice President alongside Buhari, may pull a surprise in 2023.

The campaign banner, which was attached to a bridge in a strategic location at the Central Area in Abuja had a picture of Osinbajo.

The campaign banner had the inscription, “Join us, Nigeria asks for Osinbajo 2023”.

Though no party’s name or logo was inscribed on the large banner, it had the name of a group, ‘The Progressive Project 2023’ as sponsor.

Despite some groups showing interest in canvassing support for VP to be Nigeria’s next leader, Osinbajo has not officially declared his intention to be a contestant in the 2023 presidential election.

2,352 Total Views Shuaib Labaran, the lead counsel to the Nigerian government in the trial of the leader of the Indigenous…

2,514 Total Views The Presidency has said the political elite have become weary of President Muhammadu Buhari’s stay in office because…