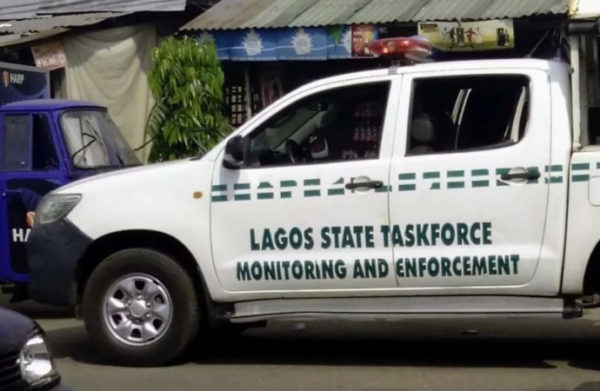 The agency said this in a statement made available to newsmen by its spokesperson, Mr Taofiq Adebayo, disclosing that Popoola was discovered to have collected the said bribe from one Didi Ekanem, who was arrested on Wednesday, 18th of November, 2020, for driving his Venza vehicle, registration no: APP 775 GJ against traffic around Lekki – Ajah expressway.

He, however, said following the immediate arrest and interrogation of the suspects by the Task Force Chairman, CSP Olayinka Egbeyemi, the decision had been reached to send them back to the Lagos Police Command for further disciplinary actions.

“The attention of the Lagos State Environmental and Special Offences Enforcement) Unit (Taskforce) has been drawn to the above-captioned story published on page 31 of the Sunday Punch Newspaper, dated 22nd of November, 2020.

“Sequel to the report, the Chairman of the agency, CSP Olayinka Egbeyemi, immediately investigated the matter and discovered that the vehicle (Venza APP 775 GJ) was arrested for driving against traffic (one-way) around Lekki – Ajah expressway by the enforcement team of the agency on Wednesday, 18th of November, 2020.

“The investigation revealed further that the vehicle was impounded and brought to the agency’s car park at Alausa, Ikeja.

“The Leader of the team DSP Popoola Kayode who is not the ‘commander’ of the agency as quoted inside the report collected the sum of N100,000 via bank transfer on his account before he released the vehicle to the owner (Didi Ekanem).

“The leader of the team and his members of his team have been arrested and queried by the chairman, while they would be sent back to the Lagos Police Command for further disciplinary actions,” the agency’s spokesperson stated.

The agency warned motorists particularly private car owners and motorcycle operators to desist from driving against traffic (one-way), saying that anyone caught would be charged to the Lagos State Mobile Court for prosecution.

Adebayo said the Task Force boss, Egbeyemi, had equally enjoined members of the public to stop inducing officers of the agency with money, reminding that both the giver and receiver were liable in Law, adding: “It is the only court that pronounces traffic fines and money paid into government purse.”

The agency, however, urged members of the public to always report any corrupt officer who engaged in shady deals thereby spoiling its image for disciplinary actions.

5,531 Total Views President Muhammadu Buhari had a piece of advice for the Nigerian National Petroleum Company Limited (NNPCL) yesterday: it…