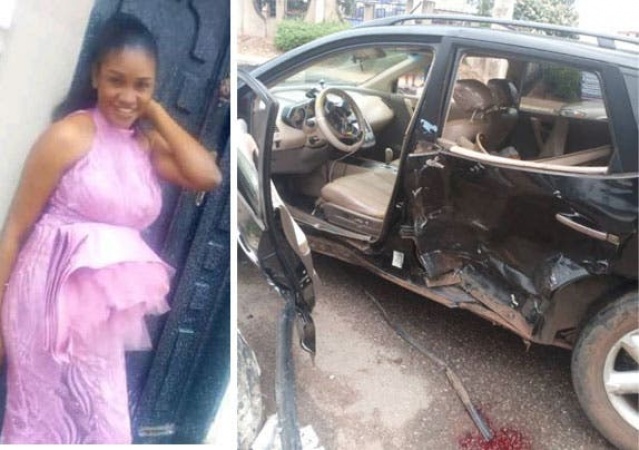 A 29-year-old woman, Mrs Grace Obajay, lost her life in an auto crash that occurred along Airport Road, Benin City, Edo State, while doctors are still battling to save the life of her one-year and five months old baby, at a private hospital.

Two other persons: the Uber driver and yahoo suspect who also sustained severe injuries were said to be receiving treatment at the hospital.

Information at Vanguard’s disposal revealed that the deceased who would have been celebrating her two years marriage anniversary in two months, worked with Floret Systems, as its Secretary.

She had ordered for Uber last Friday, after the close of work and had occupied the back seat with her baby. Barely had the Uber driver, Precious John, begun the journey, then a green Toyota Camry on high speed, hit the black Nissan Murano Uber car with plate number RRU 362 NE, from the driver’s side.

The baby was said to have been flung out of the vehicle due to the impact of the hit. He wailed in excruciating pains waiting for the soothing hands of his mother. Unfortunately, his mother according to eyewitnesses, was unconscious and was bleeding from the mouth and nose.

Speaking with Vanguard, elder brother of the Uber driver, Dickson John said, “I got a call from my brother at about 11 am. All he could mutter was ‘come quickly, I’m dying, I can’t breathe, my chest, accident, airport road…, and the call ended’. I tried reaching back to him but could not get him

“I was accompanied to the scene by one of my comrades, Godwin Esosa, where I saw my brother’s car stained with blood and fuel was dripping from its engine but there was no sight of him.

“We gathered from eyewitnesses that a team of policemen in a carton colour Audi car was chasing a suspected yahoo boy in a Toyota Camry 2012 model. In his bid to escape from the police, he ran into my brother’s car which was just entering airport road from Saint Paul. The policemen never made an attempt to save them. Rather, they abandoned them to fate.

“A Reverend father rushed the baby to Saint Philomena hospital for immediate attention, while my brother and mother of the baby were rushed to Faith Mediplex hospital for immediate medical attention. The yahoo suspect was rushed to the police clinic for treatment. At Faith Mediplex, the female passenger later identified as Mrs Grace Frank Obajay was referred to UBTH on oxygen. She was there until yesterday (Tuesday) when she died.”

Also contacted, the widower, Frank Obajay, lamented that the incident had shattered him beyond expression.

He disclosed that their baby had a fracture on his left leg, adding that surgery had been done on the leg. He said that the Police were aware of the incident right from the first day, adding that some policemen from Federal Operation had paid him a condolence visit.

But identities of the policemen who were chasing the yahoo suspect were yet to be disclosed by the Edo State Police Command, neither was news of their arrest made public.

Meanwhile, the vehicles involved in the incident had reportedly been towed to Aideyean Police station. An effort to reach the Edo State Police Public Relations Officer, DSP Chidi Nwabuzor, failed as he did not respond to calls made to his mobile line nor text message sent, as at the time of writing this report. (VANGUARD)

BBnaija: Ozo and TrickyTee pocket N1million each, all expenses paid Trip to Dubai and a year supply of Pepsi

6,765 Total Views The rate of brain drain in Nigeria medical sectors is becoming too alarming as more Nigeria doctors escape…