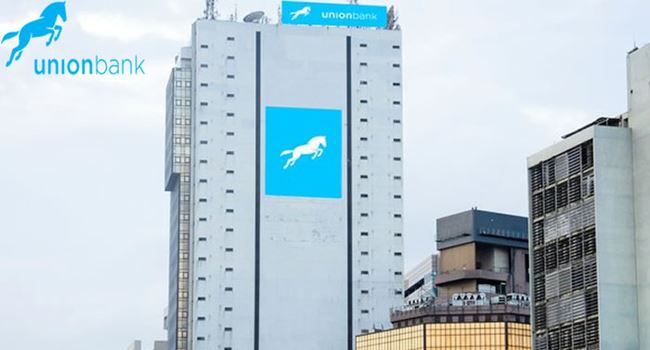 Shareholders of Union Bank of Nigeria have reached an agreement to divest 89.39 per cent of their stake to Titan Trust Bank Limited (TTB).

In a statement to the Nigerian Exchange Limited (NGX) on Thursday, Union Global Partners Limited, Atlas Mara Limited, and other existing shareholders agreed to divest 89.39 percent shareholding in Union Bank to TTB.

The statement, signed by Somuyiwa Sonubi, Union Bank’s secretary, however, noted that completion of the transaction is subject to obtaining applicable regulatory approvals and the fulfillment of certain conditions precedent.

The statement reads “The Board of Directors of Union Bank of Nigeria Plc (“Union Bank”) today announced that it has received a notification from Union Global Partners Ltd. (“UGPL”, the holder of majority shareholding in Union Bank) of the execution of a Share Sale and Purchase Agreement between UGPL, certain other existing shareholders of Union Bank (as Sellers) and Titan Trust Bank Limited (as Purchaser) for the sale of an aggregate 89.39 per cent of the issued share capital of Union Bank held by the Sellers, to the Purchaser (“the Transaction”).”

Tunde Lemo, chair, Titan Trust Bank, in the statement said the Board of Titan Trust Bank and key stakeholders were delighted as this transaction marks a key step for Titan Trust in its strategic growth journey and propels the institution to the next level in the Nigerian banking sector.

“The deal represents a unique opportunity to combine Union Bank’s longstanding and leading banking franchise with TTB’s innovation-led model which promises to enhance the product and service offering for our combined valued customers.”

Reacting to the development, Emeka Okonkwo, chief executive officer, Union Bank, described the divestment as “a significant milestone in the journey of our 104-year old bank.”

“Whilst thanking our current investors for their unwavering commitment to the Bank over the years, we welcome our new core investor, TTB,” he added.

“We recognize the strategic fit between the two institutions and expect that this deal will deliver the best outcome for our employees, customers, and stakeholders. We look forward to collectively writing the next exciting chapter for Union Bank.”

Speaking on the divestment, Mudassir Amray, chief executive Officer, Titan Trust Bank, said: “After completing over two years of operations with aggressive organic growth, we are excited to have an opportunity for a significant leap forward in market share.”

“UBN’s widespread presence, state-of-the-art technology platform, quality staff, and strong brand loyalty fits well with our synchronized modular strategy. We look forward to delivering superior results for the benefit of our staff, customers, shareholders, and stakeholders.” Following the announcement, Union Bank topped the gainers’ list at the Nigerian Exchange Limited as its shares value appreciated by 9.78 percent to close at N5.05 per share.

Retail investors have however expressed shock at the transaction, noting that the move had been strategically planned by the directors of the Central Bank of Nigeria (CBN).

Taiwo Oyerinde, a shareholder likened the move to the takeover of defunct STB by United Bank for Africa. He said the retail investors are patiently waiting for the Court Ordered Meeting which would hold in order for the plan to be cemented.

Mrs Bisi Bakare of Pragmatic Shareholders Association of Nigeria noted that the minority shareholders have been dealt a huge blow with the proposed divestment as 90 per cent shareholding stake can as well buy over the minority. She observed that, although all they are after is the return on investment but the proposed divestment lacks faith as the history of the Chairman of Titan Trust Bank, Tunde Lemon has not offered much.

“This come as a surprise because we believed the new management of Union Bank would turn things around. Even when there was a rumour that Access Bank wants to take over the bank, it was denied. Now an unknown bank, taking over is a huge blow. Although it is good because as an investor, we want our investments to be protected.”

She however advised that adequate publicity should be put to place so that what happened in the past would not repeat itself, noting that such news might lead to panic withdrawal and insinuations, which the bank can not afford at this moment as the bank needs to protect the image and the goodwill of the bank.

Shareholders, however, hoped that the move will be beneficial to shareholders as they have little faith in the administration of Tunde Lemo, who according to them, was unable to protect investments while he was in Wema Bank. “We know the move is political, however, we take it in good faith and hope things get better,” Mrs Bakare said.

“We hope their Titan Trust Bank take us into consideration and take the minority shareholders along on their decisions as we (retail shareholders) have been the one holding the bank together all this year’s despite the fact that there had been no return on our investments.”

I almost commit suicide but music saves me— Ooni of Ife

2,241 Total Views Shuaib Labaran, the lead counsel to the Nigerian government in the trial of the leader of the Indigenous…

2,403 Total Views The Presidency has said the political elite have become weary of President Muhammadu Buhari’s stay in office because…