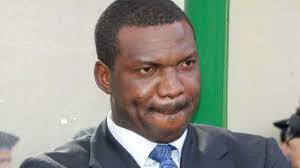 Eguavoen had led the three-time champions to three straight wins against Egypt, Sudan and Guinea-Bissau.

However, they fell short against a Covid-stricken Tunisian team in the knockout stages.

“What happens next is that I’m the interim coach and Technical Director of the Nigeria Football Federation (NFF).

“I will go back to my position and allow the NFF (to) make a decision on the way forward,” Eguavoen said after the match.

Eguavoen stepped in after Gernot Rohr was sacked last month. However, the NFF announced Jose Peseiro as the new permanent coach before the AFCON kicked off.

SaharaReporters on Sunday reported that Tunisia shocked the Super Eagles of Nigeria by sending them out of the African Cup of Nations 2021, scoring two minutes into the second half.

A shot from Youssef Msakni gave the Carthage Eagles their first goal in the game.

The goal came after Msakni’s shot from outside the 18-yard box was poorly parried into the net by Nigeria’s goalkeeper, Maduka Okoye.

Super Eagles had faced a tough challenge in the first half of their encounter against Tunisia at the ongoing Africa Cup of Nations.

A cagey opening controlled by Nigeria became tough in the 21 minutes as the Tunisian attackers put pressure on Nigeria’s defenders.

Skilful attackers Moses Simon and Kelechi Iheanacho failed to sparkle as they barely got a chance on the pitch this evening in the tough game.

Simon played a major role when the Super Eagles won their group matches against Egypt, Sudan, and Guinea Bissau.

FG to negotiate purchase of new fighter helicopters from Russia

4,352 Total Views Netflix will begin blocking subscribers from sharing their account passwords with people outside of their household in the…