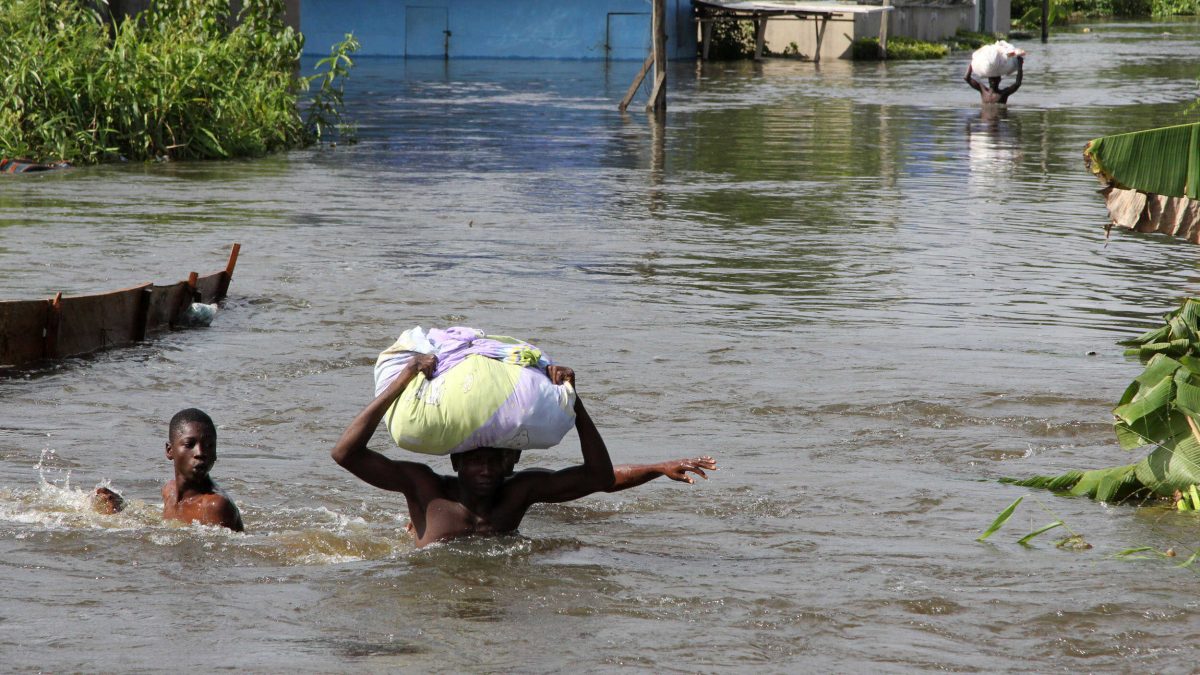 MASSIVE floods will sweep through many parts of the country between September and October, a Federal Government agency warned on Tuesday.

The Nigeria Hydrological Services Agency (NIHSA), which gave the red alert, advised residents of flood-prone areas to begin relocation because heavy rains will precipitate the flooding leading to the destruction of property and likely loss of lives.

Director-General of the agency, Mr. Clement Nze, explained that 275 local government areas of the 774 will be moderately hit by the flood while 102 councils will be worse-hit.

Lagos, Rivers, Delta, Edo and Kogi are on top of the list of states to witness major flooding.

All the local government areas in Lagos, except Epe and many parts of Ogun State, will be badly affected, the agency added.

NIHASA said governors of the states had been advised to begin immediate evacuation of residents in areas to be affected.

The NIHSA DG blamed the construction of houses on flood plains for the heavy flooding experienced in some parts of Abuja five days ago.

According to him, some lives and property were lost at ”the Sunday Adewusi Estate in the  Dei Dei area of the Federal Capital Territory (FCT) because it  was built on a flood plain.” The estate is owned by the police.

Nze said what was required before now across the country was proper drainage and demolition of structures on flood plains.

He said the flooding experienced so far in parts of the country was as a result of constant rainfall. He warned that the effect of any nation in the Niger Basin releasing water from its dam(s) might be too devastating for Nigeria if nothing was done now.

He said: “The month of June is usually the period of effective rainfalls and the beginning of a new hydrological year in the River Niger Basin which covers nine countries of Benin, Burkina Faso, Cameroun, Chad, Cote D’Ivoire, Guinea, Mali, Niger and Nigeria.

“Nigeria is downstream of all the countries in this basin. The months of July, August, September, and October are also known as JASO months signifying heavy rainfall, flooding, and flood disasters in most parts of the country.

“The country still has many days of rainfall in the course of the year. More floods are still expected in the months of August, September, and October.

In the event there is a release of excess water from the dams in other countries upstream rivers Niger and Benue, this will have a more negative impact on Nigeria which is located downstream other countries in the Niger Basin.

Lagos State, early in the month, warned residents of four local government areas, especially those living on flood plains, to vacate their homes immediately. Those in 15 other councils also got the warning.

Environment and Water Resources Commissioner Tunji Bello listed the councils to be worst-hit as Lagos Mainland, Mushin, Ibeju-Lekki and Ikorodu.

Bello explained that the local governments were identified as “highly probable flood risk in 2020”.

In a statement, Mr. Bello said the four listed councils will witness high-intensity rainfall between now and September.

He urged residents with structures in low land areas to relocate without delay to avoid any untoward incident that may come with flooding and loss of lives and properties.

Quoting from the Annual Flood Outlook released by the Hydrological Services Agency on May 28, Bello identified 15 other local government areas as those at flood risk this year.

Bello assured that the ministry would intensify ongoing efforts at clearing silted drains as exemplified by the efforts of the Emergency Flood Abatement Gang (EFAG) all over the black spots in the state.

He advised residents to refrain from an indiscriminate discharge of waste and to stop patronising itinerant cart pushers.

2,628 Total Views Labour Party presidential candidate, Peter Obi has cautioned his supporters and loyalists against being toxic, urging them to…