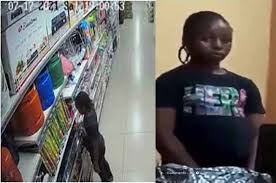 A nine-year-old girl accused of burning down Ebeano, one of the best supermarkets in Abuja, has been arrested and currently undergoing interrogation by men of the Nigerian Police force.

In the viral video clip circulating online, the girl told her interrogators that she was taken to the supermarket by her mother, she said repeatedly.

Asked what they went to the supermarket to do, she said it was to buy shoes for her and her sister. On who gave her the lighter with which she lit the fire near gas cylinders inside the supermarket, the suspect replied: “It was my mom.”

One of the interrogators remarked that they cannot detain the girl since she is under-aged while another lamented that there is no way the perpetrators can repay for the losses, which he put at N5 billion. Prince Ebeano Supermarket that was burnt down is located in the Lokogoma area of Abuja. Despite the earnest effort of Firefighters from Asokoro, Garki, Games Village and the National Judicial Institute in Abuja, the damage has been done.

IMF approves $3.4b quick intervention loan to be paid within 5years

Falana call on Buhari to reverse suspension of the CJN, NJC should act first

4,302 Total Views Netflix will begin blocking subscribers from sharing their account passwords with people outside of their household in the…