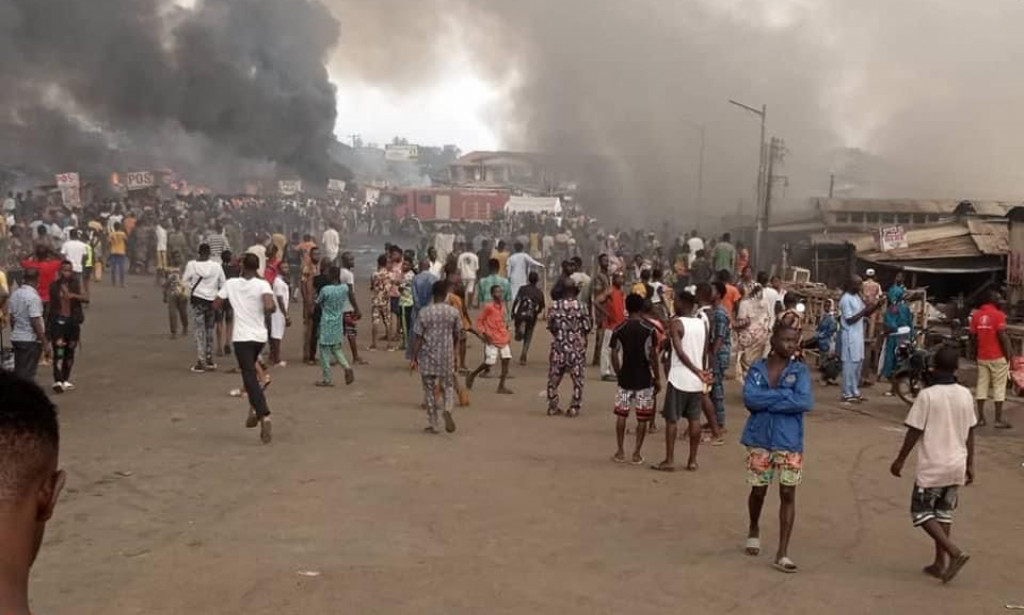 A fully loaded Premium Motor Spirit (PMS) or petrol tanker upturned at about 4.45 am when it was making its way inbound Rounder area from Oju-Irin, Lafenwa.

In a statement made available by the Public Relations Officer of the Traffic Compliance and Enforcement Corps (TRACE), Babatunde Akinbiyi, said the tanker exploded when officials of TRACE, Fire Service and other security agencies were finding a way to trainload the content of the tanker into another.

He explained that the fire outbreak was a result of residents scooping petroleum content from the fallen tanker, despite warnings from security operatives at the scene.

“The earlier reported tanker laden with fuel which overturned while making its way inbound Rounder from Oju-Irin, Lafenwa, is now engulfed in fire due to the uncooperative attitude of people around the axis through scooping of fuel and other unwholesome act which sparked off the fire.

“The general public is advised to vacate the vicinity, while TRACE, police, FRSC, Fire Service and other first responders resolve the latest emergency,” Akinbiyi said.

It could not be immediately confirmed if there are casualties as of the time of filing this report.

God made me Governor not Man – Seyi Makinde

2,883 Total Views Some angry youths in Kano State, on Monday, hauled stones at the advance convoy of the President, Major…

2,307 Total Views The President Muhammadu Buhari and the House of Representatives are on collision course over the deadline for the withdrawal of…