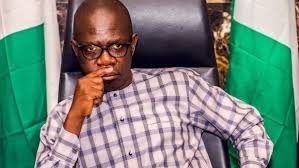 It’s no longer a new that the GOVERNOR of Ondo state Oluwarotimi Akeredolu is currently in isolation after been tested positive of the coronavirus. In a twist of event, the embattled deputy Governor Agboola Ajayi has said Governor Oluwarotimi Akeredolu has just 21 days to hand over power to him or have the constitution invoked.

The Governor who is receiving treatment for COVID-19 had on Friday vowed that he would not hand over power to his Deputy in an acting capacity.

Speaking through his Commissioner for Information and Orientation, Donald Ojogo, Akeredolu had said his Deputy was the greatest threat to his administration and has since left the ruling All Progressives Congress (APC).

But the Deputy Governor said it was ignorance for Akeredolu to have said he won’t hand over running of government to him because of political differences.

The Deputy Governor, who spoke through his Media Adviser, Comrade Allen Sowore, said Section 190(2) of the 1999 Constitution of the Federal Republic of Nigeria (as amended) was apposite in this circumstance.

He said he will continue to pray for Akeredolu’s quickest recovery.

He said the Governor was at liberty to handover or not within 21 days after which the constitution becomes operational.

According to him: “Refusal and failure of Mr Governor to handover the running of government to his deputy while in self-isolation and temporarily incapacitated underscore his absolute disregard for the rule of law; spite on the people and a direct assault on the provisions of the constitution which he swore to uphold.

“Our candid advice is that the energy dissipates to pull down the office and person of the deputy governor should be channelled towards resolving the lingering crisis in the health sector particularly, the current strike embarked on by medical practitioners in the state, in the middle of this pandemic.

“Nobody will take us seriously when doctors are on strike and yet we pretend to be fighting a pandemic. It will only indicate that we’re taking the health of the people for granted.

“The Deputy Governor has a track record of performance in the various offices he has held – first as supervisory Councillor, LG Chairman, Member of the National Assembly – where he served as the chairman of the House Committee on NDDC and even now as the Deputy Governor.

“It’s imperative to inform the general public that, Mr Governor and members of his kitchen cabinet have deliberately barred the Deputy Governor from all government activities as all the daily itinerary and work schedules released from Chief of Protocols, have not allocated any function or duty to the person or office of the Deputy Governor in recent time.

“The Deputy Governor empathises with the good people of Ondo State, at this critical period of our statehood that Mr Governor has decided to personalise  administration and governance of our dear state.”

The Fairy-Tale Behind Serena Williams’s £2.6million Wedding in New Orleans

Three reasons Atiku will perform much better than Buhari ― Obasanjo

6,070 Total Views Crisis continue to rock the PDP camp in Osun. A fresh spirited effort to resolve the crisis rocking…

7,749 Total Views The National Chairman of the All-Progressives Congress (APC), Adamu Abdullahi has withdrawn from a suit filed against the…