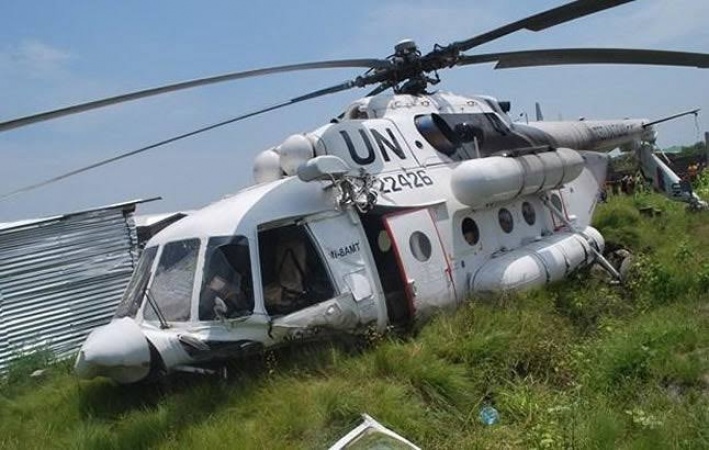 The UN Resident Coordinator in Nigeria, Mr Edward Kallon, confirmed the terrorists’ attack on Saturday, condemned the shooting of the plan, and called on the Federal Government to bring the perpetrators to justice.

A source at the UN Mission House in Maiduguri, Borno State told one of our correspondents that the UN had suspended its air expeditions in the troubled North-East for at least one week.

According to Kallon, the UN Humanitarian Air Service is essential to evacuate injured civilians and in 2019 transported 66,271 passengers and 147 megatons of humanitarian assistance.

He therefore lamented that the attack on UN helicopter would affect the organisation’s ability to reach remote areas.

The UN chief said, “I am gravely concerned by reports of another violent attack by non-state armed groups in Damasak in which at least two civilians lost their lives, including a five-year old child. Several others were injured, and a humanitarian helicopter was hit, sustaining serious damage.

“I welcome the government’s commitment to investigate the attack and swiftly bring to justice the perpetrators. A UN Humanitarian Air Service helicopter was hit by bullets during the attack. No aid workers were on board at the time and crew members are all safe.

“I call on all parties to allow and facilitate safe and unimpeded access for humanitarians to deliver life-saving assistance to the most vulnerable people in the north-east. Insecurity and violent attacks continue to hamper the ability of people to access basic services or livelihoods and recover from the protracted crisis in North-East Nigeria. I call on the Nigerian authorities to reinforce the safety and security of all humanitarian workers.”

Meanwhile one of the UN workers, who spoke on condition of anonymity, added, “The helicopter was on a flight to pick some aid workers from Damasak to Maiduguri on Friday but the trip was suddenly aborted after the aircraft was shot by some members of the terrorist group using surface-to-air missiles.

“The unfortunate development forced the United Nations Humanitarian Coordinator to order the suspension of all the agency’s air expeditions in the area for a week.”

8,036 Total Views Governors in the camp of the Rivers State Governor Wike yesterday boycotted the inauguration of the Peoples Democratic…