Home > slideshow > Ondo Election: Mayhem in Ipele and Owo town after APC and PDP Supporters clash in a gun battle 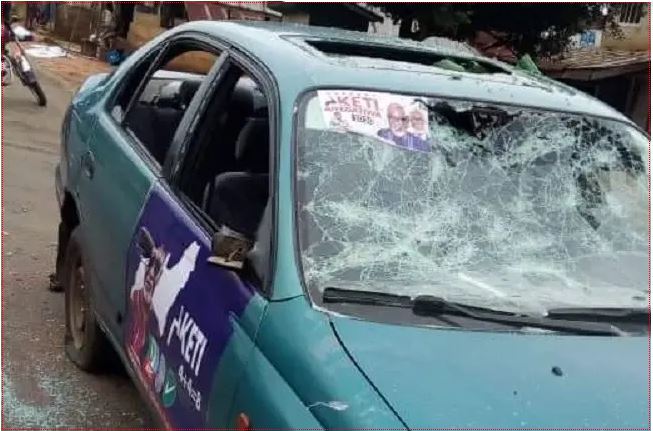 Ondo Election: Mayhem in Ipele and Owo town after APC and PDP Supporters clash in a gun battle

No fewer than eight persons were seriously injured during a clash between the supporters of the Peoples Democratic Party (PDP) and the ruling All Progressives Congress (APC) in Ipele, Owo Local Government Area of Ondo State on Tuesday.

About 20 vehicles were destroyed during the fracas while the streets of Ipele was littered with shells of bullets after the fracas which extended to Owo town.

Speaking on the attack, the head, media research office of the Eyitayo Campaign group, Samuel Fasua, alleged that the hoodlums suspected to be APC thugs prevented the team from gaining access into Ipele town for its political campaign.

He also alleged that the attack was supervised by a divisional police officer in the town who arrested six members of the PDP during the attack including the party’s youth leader who was allegedly beaten to coma.

According to him, he said the hoodlums unleashed terror on the campaign train of Jegede, adding that some members of the party were injured during the attack.

Fasua also said some men of the Nigerian Security and Civil Defence Corps (NSCDC) were able to bring the situation under control.

He explained that “our campaign team was yet again attacked by members of the APC in Ipele who had blocked access to the palace of the king and the maternal home of the PDP candidate in a bid to deny him access to both places earlier scheduled to be visited by Mr Eyitayo Jegede.

“Prior to our entry into Ipele, louts and miscreants under the APC had unleashed terror on our members with several casualties. These miscreants were dispersed by a joint team of police and NSCDC officers.

“We would like to warn the APC and its outgoing government to know very clearly that no single individual has the monopoly of violence.

“While we are very cautious about the broad implication of promoting violence in this election, we, however, would not be intimated in our pursuit of victory in at the polls.”

But the spokesperson of Akeredolu Campaign Organization, Richard Olabode Olatunde, specifically alleged PDP of drumming the beat of war, saying the party ordered its thugs to unleash coordinated attacks on the innocent people of Ipele and Ijebu Owo.

Olatunde also explained that “earlier today, on our way to Akoko South West in continuation of our local government campaign in Akoko South West, we noticed that all our billboards and banners have been destroyed at Emure Junction.

“Sensing that the PDP might be in the main town, Governor Akeredolu ordered his campaign convoy to take another route out of the town.

“Despite this, Eyitayo Jegede and the PDP still went ahead to cause mayhem in Owo by attacking innocent members of the public and anyone with APC or Akeredolu branded caps or T-shirts.

“We want to place it on record that Eyitayo Jegede is drumming beat of war. We are preparing for an election that will be determined by the people of this state. The people of Owo are oppressed and victimized by the PDP today.

“This intimidation to scare the people of Owo from coming out to vote massively for their son will not work. The people are resolved to support Governor Oluwarotimi Akeredolu.

We must also note that the PDP went berserk when no one received them into Owo. They obviously prepared to come into the ancient town for attacks and violence not to campaign.”

The party called on security agencies “to wade in and investigate this ugly incident,” adding that “Governor Akeredolu has reiterated that no election is worth the lives of the people. As we speak, there are scores of Owo people in the hospital in critical condition.”

6,782 Total Views The rate of brain drain in Nigeria medical sectors is becoming too alarming as more Nigeria doctors escape…