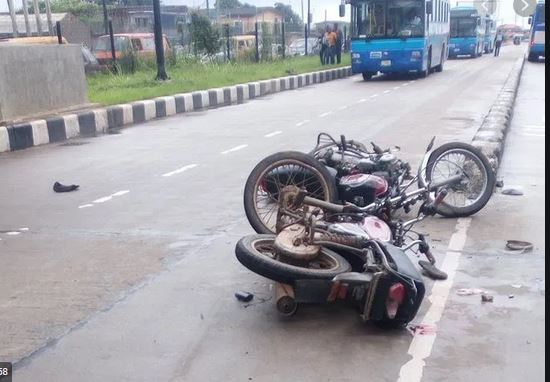 Despite warning from the state Government, restricting okada riders from all major roads and express way in Lagos, a commercial motorcyclist was yesterday injured after hitting a Bus Rapid Transit (BRT) on Agege Motor Road in Lagos. The Okada rider was trying to access the BRT lane in a bid to escape traffic gridlock before colliding with the bus.

He broke his leg in the process. The crash occurred near Air Force Base.

The driver of the BRT stopped after his attention was drawn to the incident by passersby.

People quickly rushed to give the Okada rider first-aid treatment before the arrival of medical personnel.

The BRT bus was impounded by police while passersby and officials of the Lagos State Traffic Management Authority (LASTMA) evacuated the injured cyclist.

He was put in an ambulance and driven to the Lagos State University Teaching Hospital (LASUTH).

Ondo Election: Mayhem in Ipele and Owo town after APC and PDP Supporters clash in a gun battle

Teacher ‘flogs’ a JSS student to death in Delta

1,902 Total Views The Federal Government has set a deadline of December 1 for civil servants to take the COVID-19 vaccine….