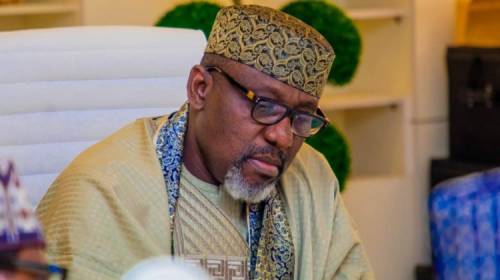 The embattled former Governor of Imo State and one of the presidential aspirants of the ruling All Progressives Congress (APC), Senator Rochas Okorocha has arrived at the venue of the party’s presidential screening in Abuja.

The APC presidential screening exercise which started on Monday is expected to end today (Tuesday). Okorocha arrived at Transcorp Hilton Hotel, the venue of the exercise on Tuesday night shortly after he was released by the Economic and Financial Crimes Commission (EFCC).

Justice Inyang Ekwo of the Federal High Court had on Monday granted the former governor, who was arrested by the anti-graft agency over alleged N2.9 billion fraud, bail of N500 million with a surety in the same amount.

One of his legal counsel, Steve Asimobi, had said that Okorocha would be attending the screening exercise of presidential aspirants later in Abuja.

“His Excellency, Rochas Okorocha would be attending the APC presidential screening later today. The court has granted him bail. Of course, there were two options, either to remand him in Kuje prison or the EFCC custody pending when we meet the bail condition.

“Hence the judge asked the EFCC to keep him in protective custody, and that is a usual administrative procedure. The judge also ordered the EFCC to return his international passport to the court today with immediate effect.

As I speak to you, the sureties required are currently in court with all the requirements, and they’re processing it. So, once we’re done with these, the judge would order the EFCC to release him. He’s only under the protective custody of the EFCC based on the directive of the court,” Asimobi had said.

US declares National Emergency over the spread Coronavirus

4,177 Total Views Some angry youths in Kano State, on Monday, hauled stones at the advance convoy of the President, Major…

3,601 Total Views The President Muhammadu Buhari and the House of Representatives are on collision course over the deadline for the withdrawal of…