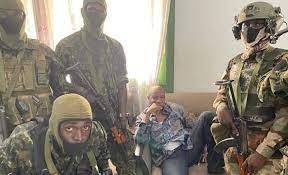 Morocco’s national team are stranded at their hotel in Guinea after soldiers stage a coup in the west African’s capital Conakry on Sunday.

Guinea were supposed to host Morocco in a World Cup qualifier on Monday but the match has been postponed following the uprising and closure of Guinea’s borders. The president of Guinea was detained after a successful military coup in the West African nation.

Although reports claims the team are safe and secured in their hotels, Morocco’s national football team was “safe” on Sunday in Guinean capital Conakry, a Moroccan official said, after army putschists said they had staged a coup in the west African country.

The federation “is working on evacuating the team today. There’s already a plane at the airport,” he added.

Heavy gunfire was heard in central Conakry on Sunday, as the putschists claimed they had arrested President Alpha Conde, sending AFP a video showing the head of state surrounded by soldiers.

But the government said in a statement of its own that it had “repulsed” an attack on the presidential palace.

Dangote refinery to employ 40 - 57,000 personnel in the coming month

1,211 Total Views THE University of Abuja Teaching Hospital (UATH) has vindicated itself of alleged complicity in the death of a…