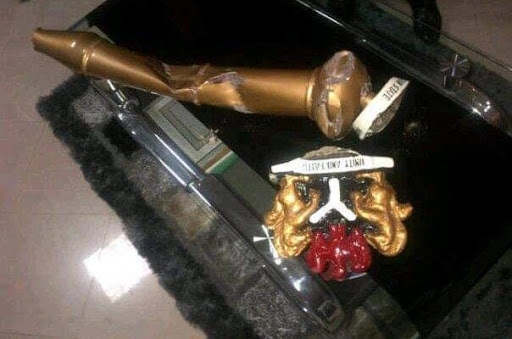 The level of insecurity in the country has gotten to an unprecedented level. In a shocking development that occurred on Thursday, when Suspected hoodlums on burgled the office of Speaker of Ogun State House of Assembly, and carted away the mace, says a whole on the current security level in the state.

However, part of the mace has been recovered. The search is on for the remaining parts.

The yet-to-be-identified hoodlums, broke into the speaker’s office overnight to perpetrate the act. This incident was the second time unknown persons would break into the assembly within the last three weeks.

The assembly complex, is located a few metres away from the Governor’s Office, Abeokuta.

The Commissioner of Police, Edward Ajogun, had earlier on Thursday, visited the assembly for an on-the-spot assessment.

When contacted, the Spokesman of the Command, Abimbola Oyeyemi, confirmed the incident. He, however, said a part of the mace has been recovered.

When asked how it was recovered, the PPRO declined to give details, saying it would be made public after the recovery of the whole mace.

I will beat Anthony Joshua in three rounds - Tyson Fury

We do not serve corporate class only; we serve middle and lower class too – Nnamdi Okonkwo

Pipeline Explosion: Monarch blames Security Operatives for death of Over 150 in Abia

Reps battles over evacuation of Nigerians from China

6,011 Total Views Crisis continue to rock the PDP camp in Osun. A fresh spirited effort to resolve the crisis rocking…

7,690 Total Views The National Chairman of the All-Progressives Congress (APC), Adamu Abdullahi has withdrawn from a suit filed against the…