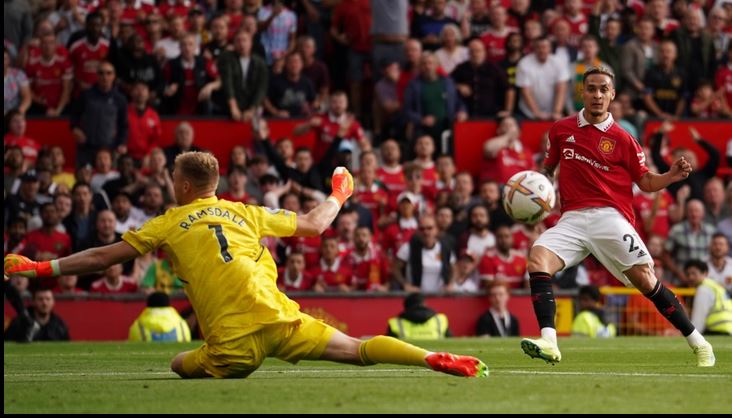 Antony scored on his dream debut for Manchester United as the Brazilian’s clinical strike and Marcus Rashford’s double inspired a 3-1 win that ended Arsenal’s perfect start to the Premier League season on Sunday.

Full of flicks, tricks and purposeful movement, the 22-year-old forward took just 35 minutes to get on the scoresheet in a dazzling introduction to his new fans at Old Trafford.

Arsenal hit back to equalise through Bukayo Saka, but Rashford blew the leaders away with two goals in the space of nine second-half minutes after Antony was replaced by Cristiano Ronaldo.

Thanks to Antony and Rashford, United were able to celebrate a fourth successive victory that lifted them to fifth place.

Opening his reign with consecutive losses against Brighton and Brentford was a humbling experience for Ten Hag.

But since then, the Dutch coach has started to put his imprint on a United side that look far more organised than the shambolic unit that finished sixth in the Premier League last season.

Arsenal’s first defeat this term after five successive wins was cruel on Mikel Arteta’s men, who contributed plenty to an engrossing encounter but paid the price for some naive defending.

Arsenal thought they had snatched the lead in the 12th minute as Gabriel Martinelli raced away from Diogo Dalot to clip a fine finish over David de Gea.

But VAR intervened to ask Paul Tierney to check for a foul in the build-up and the referee ruled Martin Odegaard pushed Christian Eriksen to steal possession.

See Conditions that may delay re-opening of churches in Lagos

3,063 Total Views Netflix will begin blocking subscribers from sharing their account passwords with people outside of their household in the…