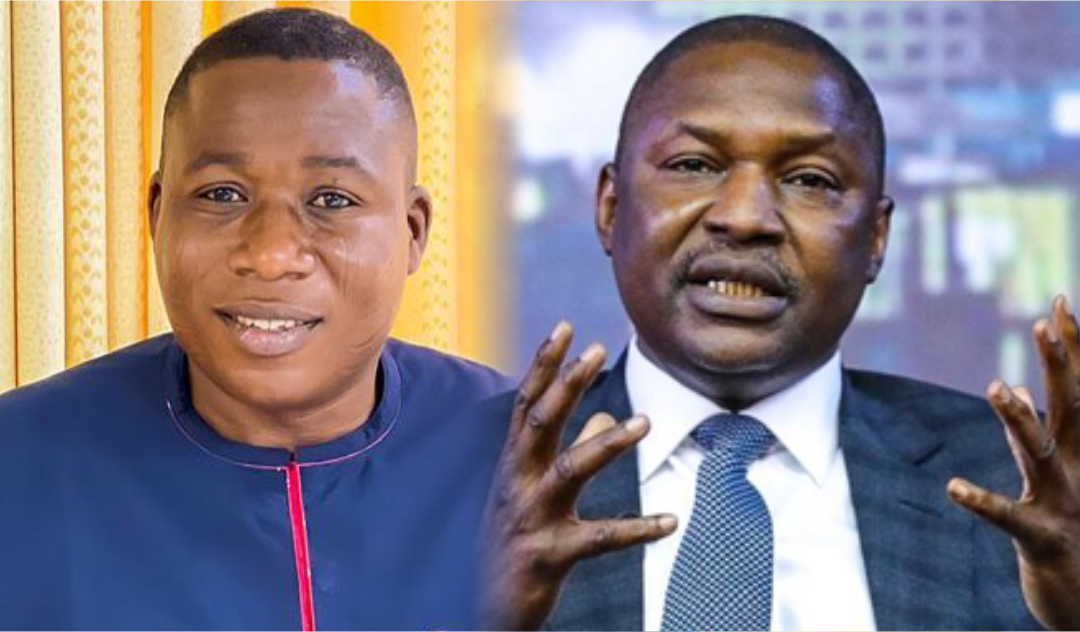 The Attorney General of the Federation (AGF), Abubakar Malami (SAN), on Wednesday prayed Justice Ladiran Akintola of the Oyo State high Court sitting at Ring Road in Ibadan, to strike out the suit filed before him by Yoruba nation agitator, Sunday Adeyemo, popularly known as Sunday Igboho, on the ground that the court lacks the inherent jurisdiction to hear the matter

Malami had through his counsel, Abdulahi Abubakar, filed a notice of preliminary objection to the suit brought pursuant to Sections 251 (1)(R) of the 1999 constitution, Order 2, Rule 1 and 2, Order 8, Rules 1 and 2, and Order 9, Rule 1 of the Fundamental Rights (Enforcement Procedure) Rules 2009, Order 3, Rule 1 of the Oyo State High Court (Civil Procedure) Rules 2010.

Abubaka and his team had filed the objection along with a Motion on Notice to ask for an extension of time to enable him file his preliminary objection, counter affidavit and written address in opposition to Igboho’s application and both processes were moved before the court at the resumed hearing of the matter.

The motion for extension of time was however objected by Igboho’s legal team led by Chief Yomi Alliyu (SAN) on the grounds that extension of time could not be applied as time is of essence in a suit of such nature.

He had argued that the law stipulates those replies shall be given within five days, stressing that Malami had nowhere to hide because the case is predicated on the issue of fundamental human rights, adding that by filing the motion on notice, Malami had called for the discretion of the court.

Alliyu consequently asked the court to exercise its discretion instead of granting Malami’s application.

On their part, T. A. Nurudeen, who is the counsel to the Directorate of Security Services (DSS), which is the second respondent and the director of DSS in Oyo State, who is the third respondent, had no objection to Malami’s application.

Giving a bench ruling on the matter, Justice Akintola allowed Malami’s lawyers to move his application and awarded the sum of N50,000 as cost in favour of Alliyu and his team.

The case was adjourned till August 30 for further hearing.

Malami in his preliminary objection to Igboho’s suit had argued that the claims of unlawful killing of Igboho’s aides cannot be brought under fundamental human rights enforcement procedure, adding that claims for damages and unlawful invasion of Igboho’s Ibadan residence on July 1 can also not be resolved by way of affidavit evidence without calling witnesses, among others.

The application read in part: “The claims of the Applicant for unlawful killing, tort of trespass, assault and battery cannot be brought under Fundamental Right (Enforcement Procedure) Rules 2009.

“Claims for damages for invasion of House, unlawful killing, tort of trespass, assault, battery and allegation for discrimination and secessionist cannot be resolved by way of affidavit evidence without calling for witnesses, tendering of documents and even a likely visit to locus in quo.

“That this Honourable Court lacks the jurisdiction to entertain the suit. In view of the above and same should be struck out,” he argued.

Igboho on his part is seeking an order of the court declaring the invasion of his Ibadan residence by operatives of Department of State Security (DSS) on July 1 as illegal and an infringement of his fundamental human rights. He wants the same order to apply to his aides and guests who were arrested and taken to Abuja by the DSS men.

Meanwhile, the order given by Justice Akintola on August 4, restraining the DSS or any other security agency from arresting or harassing Igboho still subsists.

8,004 Total Views Sonnie Bassey, the man who lost his wife in a fatal accident while she was chasing him and…