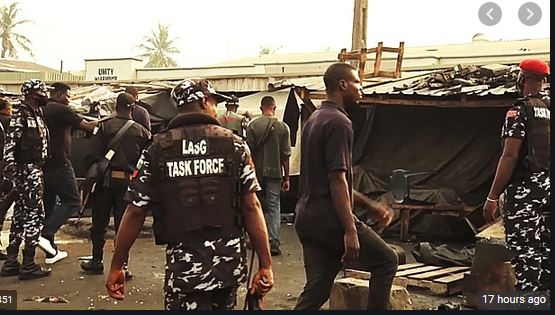 The Lagos State Government has commenced the demolition of shanties and other structures built on the right of way of the Oshodi-Apapa Expressway.

The state task force led by the Federal Controller of Works, Mr Olukayode Popoola, particularly targeted shanties along the service lane at Ladipo, Toyota and Charity Bus tops, as well as those located under the bridge leading to the airport road.

Every item found along the way including automobile parts was cleared.

Cars and trucks carrying containers were also towed-off the right of way.

The demolition comes at the expiration of a two-week ultimatum given to residents and traders to vacate the areas.

Minister of Works and Housing Mr Babatunde Fashola had appealed to residents to vacate the area during a visit to the bridge in the aftermath of a tanker fire on January 7.

106,000 customers to get free meter under Phase1 of the National Mass Metering Programme (NMMP)- Ikeja Electric

2,153 Total Views Former Governor of Ekiti State, Ayo Fayose, has said that the election of the South-west zonal congress of…