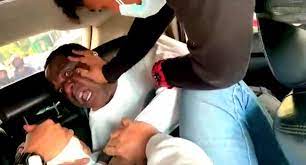 The government of Indonesia has apologized to Nigeria over the manhandling of a Nigerian Embassy staff by immigration officers.

Usra Hendra Harahap, Indonesian Ambassador to Nigeria, tendered the apology when he was summoned by the Minister of Foreign Affairs, Geoffrey Onyema.

A statement by the Ministry stated that “the Ambassador explained what he understood what happened and apologized unreservedly on behalf of the Government of Indonesia.”

The Ministry also revealed that the federal government had sent a “strong complain” to the Asian country, adding that the “incident is against international law and the Vienna Conventions governing Diplomatic and Consular Relations between States.”

A video making the round on social round showed when about three men wrestled a black man to the interior of a car, where they pinned his neck to the car seat.

In the video, the man could be heard screaming, “my neck, I can’t breath,” while his handlers kept the pressure on.

In the statement, the Ministry confirmed that the incident concerned a Nigerian Diplomat at his official quarters in Jakarta, on 7 August 2021.

We will stop eating cows from north by April, IPOB Insist

3,693 Total Views Netflix will begin blocking subscribers from sharing their account passwords with people outside of their household in the…