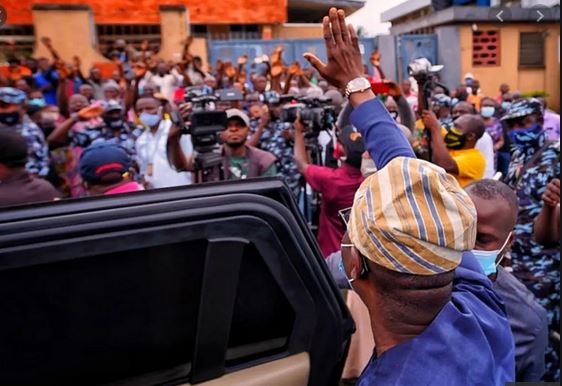 Governor Babajide Sanwo-Olu of Lagos State visited the scene of the accident yesterday to personally assess the situation. He pledged to repair the buildings damaged by the chopper.

He was rushed to the hospital for treatment but died soon afterwards. The helicopter was on its way from Port Harcourt and crashed a couple of minutes before its scheduled touch down at the domestic wing of the Murtala Muhammed Airport,Ikeja.

Governor Babajide Sanwo-Olu of Lagos State on Saturday visited the scene of the accident at Salvation Road, Opebi, Ikeja.

We’ll repair structure damaged by crashed chopper, says Sanwo-Olu at accident scen. The governor spoke with the residents and thanked God for saving their lives

Sanwo-Olu said he was out of town when the accident occurred on Friday otherwise, he would have been there immediately.

He spoke with nonagenarian Comfort Adeniyi-Johnson who was all alone at home reading her Bible when the helicopter plunged into her fence.

The governor said: “The people affected are senior citizens of this state and we have come to see them.

“We will start working on the fence and the government agencies are here to support them.

“I want to commend all our frontline workers. I have received calls from my colleagues, and I thank those who sent me messages personally.”

Nigerians in their thousands on Saturday took to the social media to salute the pilot of the Bell helicopter 206B3 which crashed at Opebi, Ikeja, Lagos on Friday, for his courage and selflessness.

For many of them, Captain Ernest Chika, was a hero for emptying the helicopter’s fuel tank when he sensed trouble and avoiding crashing the aircraft into houses.

His action is believed to have saved many innocent souls and minimised damage at the scene of the accident.

An unconfirmed report said he dedicated his child only a week before he met his death.

His employers and operators of the helicopter, Quorum Aviation, dismissed reports that the chopper was not airworthy, while the Accident Investigation Bureau (AIB) continued it probe of the accident.

6,656 Total Views The rate of brain drain in Nigeria medical sectors is becoming too alarming as more Nigeria doctors escape…