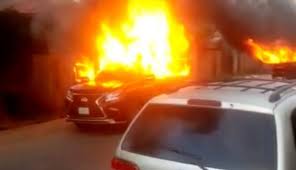 Also killed in the attack was the Team Manager of his football club, Godsent and the Secretary of Anambra Independent League (AIFL).

Udala, as he was fondly called was attacked at the Eke Agu market in Abatete, Idrmilil North Local government area of the state.

According to a source, Udala’s convoy was attacked by unknown gunmen who arrived the scene in two Highlander jeeps and one Lexus.

He said: “They shot the occupants of the car and set the three cars on convoy on fire with the people inside before leaving the scene.”

It was gathered that the assailants had reportedly attacked a local police station and were fleeing the scene when they met the convoy of Udala in Abatete and attacked it.

Udala, a jovial lover of football was before his death a grassroots football development master.

Confirming the incident on Wednesday in a text, the Chairman of AIFL, Rev. Fr Obinna Dike said: “The amateur league had lost two important members of the football family.

May the souls of Chief Philip Udala and Godsent Eriobu rest in the Lord, Amen.

“So sad, our worst fears are becoming reality, we lost them.”

The statement reads in part: “As the AIFL awaits official confirmation and releases from the respective quarters, she pleads with numerous guests, stakeholders and teams for the event to kindly adjust accordingly, as inconveniences are regretted.”

Not fewer than 40 villages sacked by flood in Adamawa

1,862 Total Views The Federal Government has set a deadline of December 1 for civil servants to take the COVID-19 vaccine….