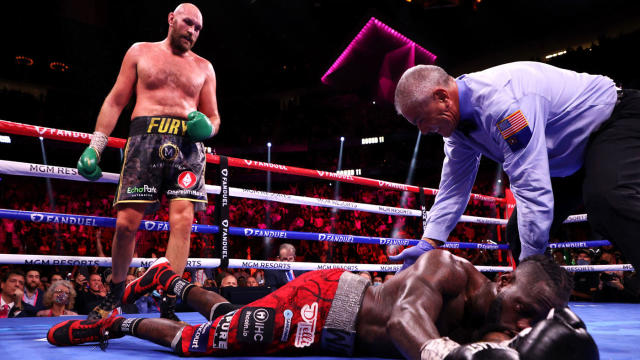 Fury humble Wilder for the second time to retains belts

The Tyson Fury and Deontay Wilder heavyweight title fight lived up to the hype. Fury threw an incredible combination of punches and knocked Wilder out in the 11th round to retain the WBC and The Ring magazine heavyweight titles.

Wilder came out of his corner quickly and went after Fury with some important jabs to the body. Things got a little dicey for Wilder in the third round when Fury knocked him down. Wilder looked like he was shaken up a bit but came back really strong in the fourth.

Wilder knocked Fury down twice and the fight began to shift toward the “Bronze Bomber.”

As the bout drudged on, both fighters appeared to start getting gassed. Both fighters began to get tangled up more and the ravenous crowd began to simmer down.

Fury started to go to the body more in the seventh round. Fury put Wilder on the ropes with a devastating uppercut. Somehow, Wilder made it through the round without getting knocked down. But the Alabama native was leaning on Fury a bunch.

In the eighth round and ninth rounds, Fury and Wilder traded punches. Both fighters landed good shots to each other’s faces. Wilder’s lip busted open at the end of the ninth round.

Fury then landed a huge shot in the 10th round that caught Wilder and send him to the ground. The referee continued the fight and Fury smelled blood in the water and started pummeling. Wilder countered at the end of the round and looked like he was getting some momentum.

Wilder was taking more shots in the 11th round, including a nasty uppercut with 2 minutes left in the round. Fury then landed the final shot that sent Wilder down.

The crowd at the T-Mobile Arena in Las Vegas got a serious heavyweight battle and it nearly went the entire night.

1,934 Total Views The Federal Government has set a deadline of December 1 for civil servants to take the COVID-19 vaccine….