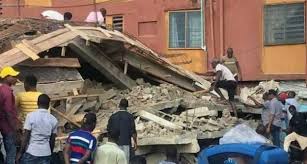 Not less than seven persons died on Sunday as a building collapsed in Obalende area of Lagos Island.

The state Emergency Management Agency (LASEMA) said eight persons were injured. The three-storey building located at 62 Odo Street was under construction when it collapsed, LASEMA said in a statement, adding that the cause of the collapse was not yet known.

“Twenty people have been extricated alive by the LASEMA Response Team and other stakeholders, and…transferred to the hospital by LASEMA paramedics for further medical attention at Lagos Island General Hospital.

8,268 Total Views Governors in the camp of the Rivers State Governor Wike yesterday boycotted the inauguration of the Peoples Democratic…