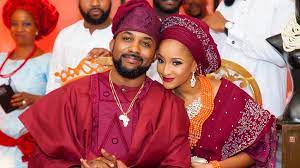 Celebrity couple Banky W and wife, Adesua, have recounted how they lost twins to miscarriage. During an episode of “The Waterbrook series”, they said they were totally distraught upon realizing they had lost their twins.

The award-winning actress said she wailed after she got the news her twins were no longer breathing.

She recounted how she collapsed immediately after getting home from the hospital.

Banky W narrated how the heartbeats of their twins not only stopped but started shrinking before they died.

The couple spoke about how they planned on adoption or surrogacy at some point.

They disclosed their family pastor told them to give it six months which were followed by several dreams and visions of them carrying their baby.

Adesua revealed she found out she was pregnant and all she said as she looked at the positive pregnancy stick was “Olubankole God has done it.”

The couple finally had their first child, Zaiah in January 2021

Use face mask or face arrest, as police gear up raid in Lagos

Army Issue Out Strong Warning to Killer Herdsmen and financiers

7,917 Total Views Sonnie Bassey, the man who lost his wife in a fatal accident while she was chasing him and…