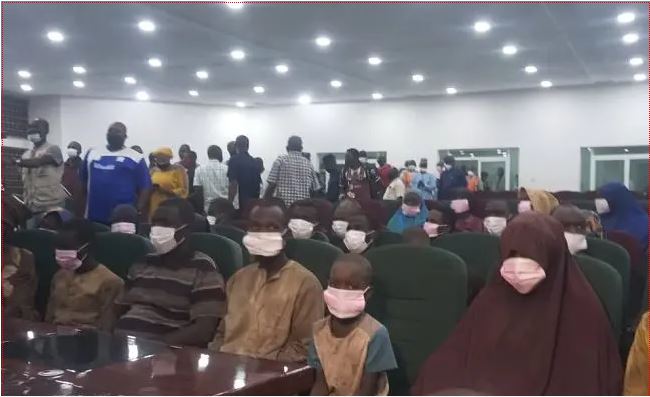 Some 53 Persons were released yesterday but obviously not the highly broadcasted Kangara student abduction. Governor Abubakar Sani Bello of Niger State has said the abducted students of Government Science College Kagara were still with the bandits. He said this when, at about 11:15 pm on Sunday, while receiving some 53 persons abducted by bandits. The persons included some underaged children, young boys, women and few old men. They were received at the main hall of the Government House, Minna where the governor’s cabinet members and journalists were also awaiting them.

The kidnapped victims who were brought in three 18-seater Toyota Hiace buses looked exhausted, malnourished, and were struggling to walk while some of the nursing mother’s held tightly to their little children as they came out one after the other. They were ushered into the hall amidst very tight security involving the police and Civil Defence personnel.

Receiving the victims, Governor Abubakar Sani Bello said, “Thank God we have in our midst some 53 abductees of the NSTA bus who have been in the captives of a tremendous trauma as you can see that they are all seated here inside the hall about 53 people in number.

Speaking further, the governor said that “they were definitely looking exhausted and malnourished and very dirty,” adding that “at the end of the day we are grateful to God Almighty for guiding us, for protecting them and for showing us the grace to secure their release.”

He disclosed that the state government went through one week of dialogue, consultation, hard work and sleepless nights in order to secure their release, stressing that “because we have had to ensure that we ensured that we secured  their release within the shortest possible time.”

The governor, however, explained to the gathering that “we still have the students of Science Secondary School, Kagara in the hands of the captives” assuring that everything was being done to ensure their release soonest.

He thereby thanked everyone at this moment that had played one role or the other in their efforts for the release of the 53 persons whose release were secured on Sunday, while thanking their loved ones for the understanding that they have shown in this trying moment for the state and its people.

Okorocha, others in Police net over forceful attempt to reclaim wife’s seal estate

4,345 Total Views Breaking from a century-old tradition in the name of health and safety, the largest convention organization in the…