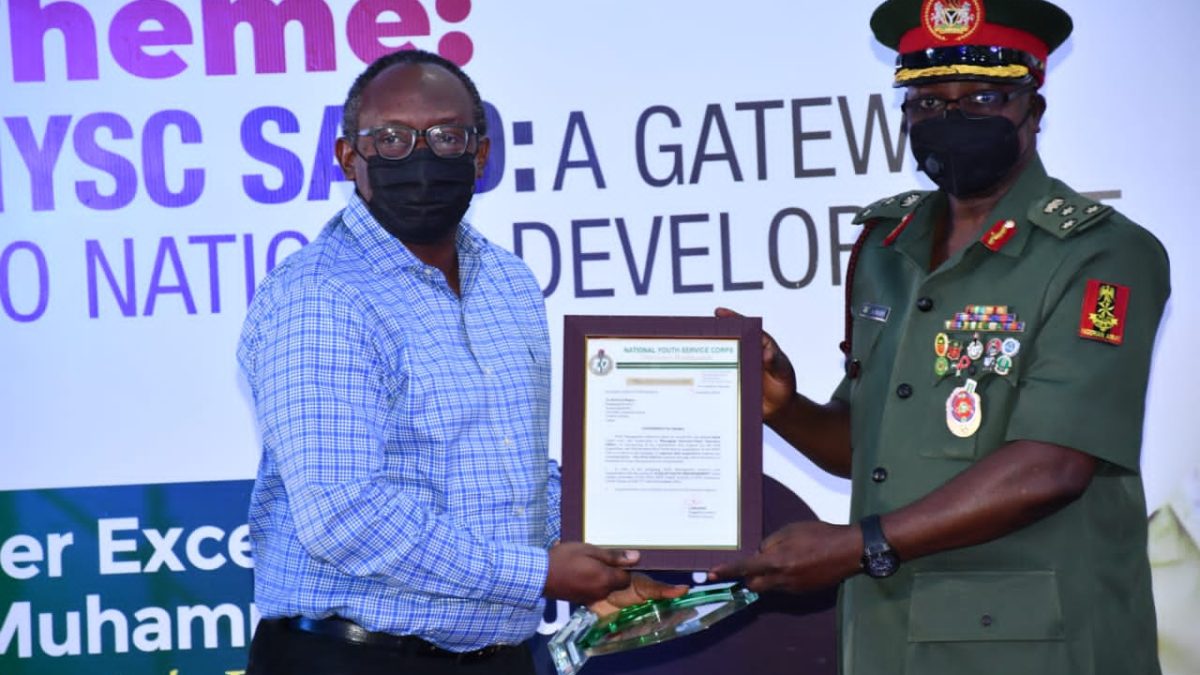 In recognition of Unity Bank Plc’s contribution to the growth of entrepreneurship among Nigerian youths, the National Youth Service Corps, NYSC has named the lender “Icon of Youth Empowerment” in an award presented to the Bank during the Skills Acquisition & Entrepreneurship Department, SAED Festival held in Abuja recently.

The NYSC management said it was on record that Unity Bank under the able leadership of the MD/CEO, Mrs. Tomi Somefun had been unwavering in its commitment and support for the Skills Acquisition and Entrepreneurship Development programme of the NYSC as evident in the Corpreneurship initiative through which businesses of hundreds of corps entrepreneurs are being funded.

“In view of the foregoing, NYSC Management honours (Unity Bank) with the award of “Icon of Youth Empowerment” at the closing ceremony of the 2021 NYSC SAED Festival at NAF conference centre, Abuja on this 17th Day of December 2021,” said the Director-General of the NYSC, Brigadier General S. Ibrahim, while presenting the award to Unity Bank.

Speaking after receiving the award, the Group Head, Retail, SME and E-Banking, Mr. Olufunwa Akinmade said: “We are encouraged by this award to continue to partner with SAED in driving the Corpreneurship initiative. We believe that the Corpreneurship Challenge possesses the capacity to unlock the entrepreneurship ingenuity of the youths in Nigeria.

“We commend the leadership of the NYSC for the award, even as we appreciate the leadership and the team at SAED for working hard to make this partnership produce the desired outcome. We are optimistic that the partnership will be sustained for as long as possible until it has impacted a critical mass that considerably reduces graduate unemployment in our nation.”

The Corpreneurship Challenge, which earned the lender the award is a business plan competition that provides corps members with the opportunity to pitch their business ideas and stand a chance of winning business grants ranging from N200,000 to N500,0000 as business capital while receiving mentorship.

Unity Bank premiered the Corpreneurship Challenge in 2019, with a launch in Lagos and in three other states which included Edo, Ogun, and Abuja, but with the increasing popularity of the initiative among corps entrepreneurs, the Bank has now extended the programme to 10 states of the federation including Lagos, Ogun, Abuja, Edo, Katsina, Enugu, Bayelsa, Akwa Ibom, Sokoto and Kaduna.

So far, Unity Bank has invested over N80 million in the initiative, which has now produced 58 winners since it was launched.

NNPC NOT CONDUCTING SURVEY, NOT RECRUITING

Four cheats death, as building under construction collapse in Lagos

3,473 Total Views Netflix will begin blocking subscribers from sharing their account passwords with people outside of their household in the…