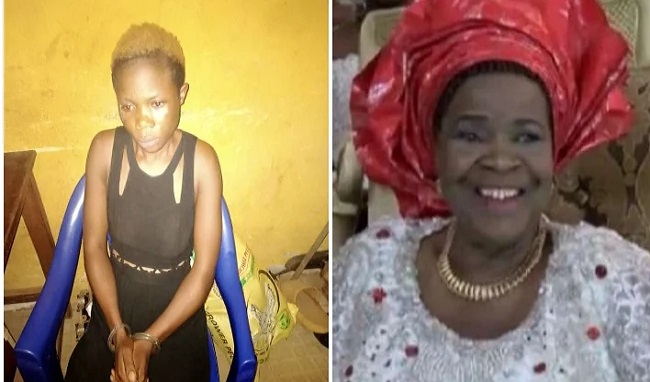 The housemaid of Mrs Maria Igbinedion, the deceased mother of Chief Lucky Igbinedion, former Edo State governor on Tuesday painted a graphic picture of how she killed the 85-year-old woman.

Miss Dominion Okoro, 25, who who was paraded at the Edo State Police headquarters in Benin alongside other suspected criminals confessed that she hit a stool on the octogenarian’s head on an attempt to steal from her.

Dominion said she sneaked into her room and made an attempt to steal her N100,000, gold necklaces and a wristwatch.

She said when she saw that the deceased saw her while trying to steal the items and wanted to raise an alarm, she quickly hit her head with a stool and she died immediately.

The suspected killer said that she hurriedly packed her belongings and ran to stay with her elder sister in Cross River State when she discovered that the woman had died.

Sunshine Queen of Akure mourns, as goalkeeper dies after training

2,835 Total Views Netflix will begin blocking subscribers from sharing their account passwords with people outside of their household in the…