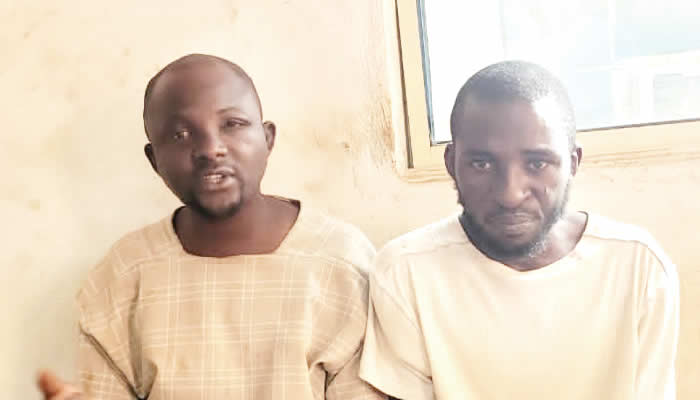 The suspects also reportedly lured the victim to an uncompleted building on Majiyagbe Street, Ipaja, where Adebayo allegedly raped her.

According to PUNCH Metro the victim was on her way to a destination in Iyana Ipaja when Fisher approached her to help him locate an address.

The suspect, who reportedly presented himself as a foreign businessman to the victim, said he came to Nigeria to deliver goods to one of his clients at the address and to collect his outstanding payments.

A source said after Fisher approached people for help to no avail, the young girl offered to help, but upon checking the address, she did not know the location.

The source said, “But as the girl was trying to help Fisher, Adebayo suddenly came as a neutral person and offered to assist Fisher, whereas they were working together. Adebayo said the address was fake, but started motivating the girl on the need for them to help Fisher.

“Fisher, while lamenting being stranded, claimed that he was in possession of some papers that could be converted to plenty money but told Adebayo and the girl that he needed money to buy chemicals to convert the papers to money.

“Adebayo quickly dropped N60,000. The girl, who seemed convinced, gave Fisher her gold jewellery and N10,000 and also went to withdraw N65,000 from a nearby ATM and gave it to Fisher, who told Adebayo and the girl to take an oath not to reveal his secret to anyone.”

After taking the oath, it was learnt that Fisher gave them a location to meet him the next day.

When they got there, the Ogun State indigene reportedly showed them the sack containing the money and told Adebayo and the girl that the spirit responsible for converting the papers to money was asking for human blood as sacrifice.

“Fisher said to prevent both of them from dying, they needed to have sex. He also used the oath they took to threaten them. So, the girl out of fear of dying, followed them to an uncompleted building around 9pm on Majiyagbe Street, Ipaja, where Adebayo had sex with her,” the source said.

PUNCH Metro gathered that after Fisher, 42, and Adebayo, 32, perpetrated the crime on September 3, 2022, the girl left the uncompleted building and proceeded to the Ipaja Police Station to report the case for investigation.

The policemen, led by the Ipaja Divisional Police Officer, CSP Tokunbo Abaniwonda, reportedly swung into action and in a two-week sting, arrested Fisher and Adebayo at their hideouts in Ipaja on September 16, 2022.

During interrogation, the suspects confessed to the crime, saying they only manipulated the victim.

Narrating how he perpetrated the crime, Fisher said he met Adebayo through a friend, Bisi, who he claimed trained him on how to formulate stories to defraud unsuspecting members of the public.

He said, “I have been asking a lot of people for the address. While some said they did not know the place, others advised me to go back to the country I came from, but I said I could not go back because of the goods that I brought.

“The girl got convinced when I said I was looking for people to help me count Nigerian money because I said I don’t know how to count it. Meanwhile, I and Adebayo had been talking to people but they did not answer us.

“It was when the girl was passing that I explained to her and she listened to me. So, Adebayo also pretended to be a passer-by and when he was passing, I signalled to him, and asked the girl to help me ask him for the location of the address and Adebayo said he had not heard of such an address before.”

PUNCH Metro gathered that Fisher and Adebayo, who are both married with two children each, were arraigned at the Ejigbo Magistrate’s Court on three counts bordering on obtaining by false pretences, fraudulent conversion and sexual assault, offences punishable under sections 411, 314 (1), 287 and 136 of the Criminal Law of Lagos State 2015.

The men were later remanded in prison as the matter was adjourned till October 17, 2022, for further hearing.

Fraudsters have been deploying different tactics to swindle unsuspecting members of the public out of their valuables in different parts of Lagos State.

I will soon come out openly, don’t want to distract the President for now – Tinubu

4,254 Total Views Netflix will begin blocking subscribers from sharing their account passwords with people outside of their household in the…